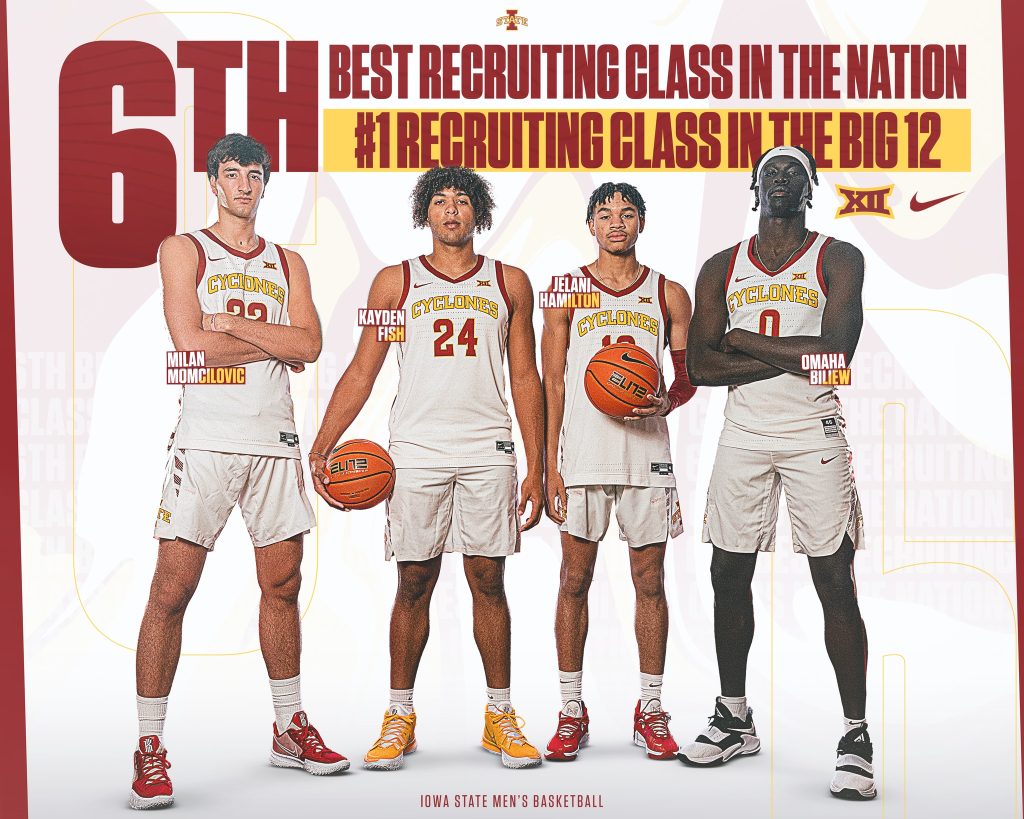 “This is a banner recruiting class for our program,” Otzelberger said. “The character and work habit these guys exude will benefit the Iowa State program for years to come.”

The class is rated No. 6 nationally by 247sports and Rivals, while ranking No. 7 by ESPN. It is the top-ranked class in the Big 12 by all three outlets.

A consensus five-star recruit, Biliew is the highest-ranked signee for Iowa State in the modern era. He is ranked in the top 15 in the country by all three national outlets, ranking as high as ninth on the ESPN Top 100. As a sophomore at Waukee HS, he led the Warriors to the Iowa 4A State Title, averaging 10.9 points, 7.8 rebounds and 3.1 blocks per game. He played his junior year at Link Academy before returning to Waukee for his senior season. He played for MoKan Elite on the AAU circuit, helping the team its third title at the Peach Jam.

“Omaha competes with relentless spirit,” Otzelberger said. “His versatility on the offensive end creates a match-up advantage and his desire to make the right play speaks to his basketball IQ. Defensively, his motor, positional size and instincts, make him an elite defender.”

Fish is a three-star recruit, with Rivals listing him as the 30th best power forward in the class. Fish teamed with Biliew on the AAU circuit with MoKan Elite. In the championship game of the Peach Jam, Fish scored a team-high 13 points. He averaged 11 points and five rebounds as a junior, while shooting 60 percent from the field and 40 percent from 3-point range.

“Kayden’s intellect, maturity and his attention to detail will provide an immediate impact on our program,” Otzelberger added. “Kayden has the ability to knock down shots and score at the rim, while making passes to set up his team. He is well schooled defensively and has great communication skills. He takes pride in winning every possession.”

Hamilton is a ranked a four-star recruit by Rivals, landing 96th on their Top 100 list. ESPN and 247 both list him as a three-star, with 247 ranking him the 15th-best recruit in program history. Hamilton is a Cyclone legacy, with both his parents attending Iowa State, while his brother is a manager for the team. Hamilton played for the Georgia Stars, a member of the Nike EYBL Circuit.

“Jelani has an engaging personality and brings positive enthusiasm that will suit him well as a Cyclone,” Otzelberger said. “He’s a prolific long-range shooter and his game will translate immediately at Iowa State. He excels in the opener floor and has the ability to finish as a bigger guard. Defensively, he has tremendous feet and positional size. He has the desire to be a shutdown defender.”

Momcilovic is a consensus four-star recruit, landing in the top 35 by all three national outlets. He is the third-best recruit in program history according to 247. During his junior year, Momcilovic led Pewaukee to its second-straight WIAA Division 2 State Title, scoring 19 points in the championship game. He averaged 18.1 points and 7.7 rebounds per game as a junior, helping the Pirates to a 27-3 record.

“Milan has an elite skill level, but also the ability to make his teammates better on both ends of the floor,” Otzelberger added. “Offensively, he shoots the ball with great range and is an extremely gifted passer, allowing him to be an effective playmaker. He is a highly competitive defensive player. Milan is consistently active on the offensive and defensive glass.”