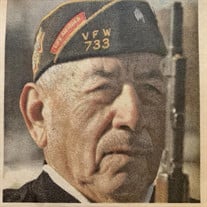 Al was born December 3, 1933, in Mason City, IA, the second son of Albert Sr. and Frances (Flores) Herrera. After graduating from Mason City High School in 1953, he joined the U.S. Army in 1954. He proudly served in the Korean War, and was honorably discharged in 1956. Al worked as a repairman/electrician for Lehigh Cement Co. and retired after 30 years. After retiring, he moved to Joplin, MO, where he raised, trained and showed Paint and Quarter Horses. In 2004, he moved back to Mason City to be close to his daughters and five grandchildren.

Al was a lifelong member of Holy Family Catholic Church. He proudly served with the VFW #733 Honor Guard for several years. In his younger years, he was an avid pheasant, duck and goose hunter and fisherman. He won many trophies and awards for training his champion hunting black lab, “Knight.” Al enjoyed being outdoors, planting and tending gardens and flowers, and helping others with small jobs.
Grandpa Al was so proud of his five grandchildren. He enjoyed spending time with them, especially the hikes at Lime Creek Nature Center. He rarely missed attending their athletics, dance, cheerleading, and choral activities from toddlers all the way through college.

Al was preceded in death by his parents, and brothers, Joe and Richard.

Services and Inurnment with Military Honors will be held at a later date.