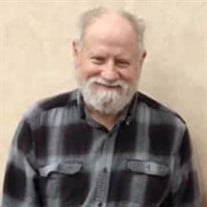 Family will have a Celebration of Life for Bill at a later date.

Bill was born on February 11, 1956, the son of William and Dolores (Warren) Adams of Fort Dodge, IA. He graduated from Fort Dodge High School in 1974 before serving time in the United States Air Force. After returning home to Iowa, he worked several different jobs. The most prominent were piloting the Queen II in Okoboji, and helping at a scuba store. Bill also had a pilot license to fly planes, some of the family members recall those trips were not as smooth as they had liked. One of Bill’s hobbies included Amateur Radio.

In Bill’s free time he enjoyed scuba diving for leisure but assisting in recovery of submerged vehicles. Being on or in the water brought Bill a lot of joy. The family will remember all the good memories they had on Bill’s pontoon. Throughout the years he occasionally had a few feline friends to add to his bachelor lifestyle. Most importantly, Bill loved his family and kept in contact with them although sometimes miles kept them apart.

Preceding Bill in death are both of his parents and five half-sisters Eva Jacobson, Marie Jacobson, Daphne Hughes, Juanita Rohrer, and Barbara Quail.