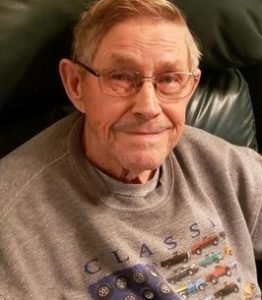 Merle Torkel Hanson, son of Mandius and Johanna (Torkelson) Hanson, was born on March 24, 1935 in Rutland, Iowa. He passed away on January 29, 2022 at Palo Alto County Hospital at the age of 86.

Merle graduated from Bode High School. Following school, he worked at Block and Tile in Humboldt. On January 1, 1955 he was united in marriage to JoAnn Enger in Ruthven, Iowa. The couple moved to their home in Graettinger in 1957. Merle began working for Olesen Brother’s Construction, before starting Merle T Hanson Construction in 1964. He continued to run his construction company until his retirement at the age of 80 years old.

Merle was a member of Bethel Lutheran Church in Graettinger. He served on the Graettinger City Council from 1974 until 1977. Merle sponsored and coached the Graettinger fast pitch softball team for a few years, and they went to the state tournament in 1977. During his younger years he was a member of the Graettinger Sno Twister Snowmobile Club. Most days, Merle could be found at the country store drinking coffee and conversing with his friends. The light of his life was spending time with his family, especially his grandchildren and great-grandchildren. He especially liked to share the suckers that he would accumulate from the local businesses with them. Elvis music and the Vikings were favorites of Merle’s. His kitchen and bedroom were painted in his favorite color, purple for many years.

Merle is preceded in death by his parents, his wife JoAnn, his daughter Terri Guinn, and his siblings Orville, Johnny, Eddie, Jeannette, Arlene, Clarence, and Clara.