Along with the historic 16-1 overall start, the Cyclones are 5-0 to start conference play for the sixth time in program history, all six coming under head coach Bill Fennelly. This is also the first time the Cyclones have won their first three conference road games since 1999-00.

Leading the way was Lexi Donarski, who had her fourth 20-point game of the season with 23 points, which included five 3-pointers. Morgan Kane was strong yet again, getting her second career double-double with 15 points and 10 rebounds. Also in double figures was Emily Ryan (13) and Ashley Joens (12).

How It Happened
Lexi Donarski’s 3-pointer put ISU ahead 5-2, a lead the Cyclones would not relinquish the entire contest. Even with leading scorer Ashley Joens not getting her first points until 1:36 left in the first quarter, the Cyclones dominated the first period, going 9-of-17 (52.9 percent) from the field, including three 3-pointers. Morgan Kane continued her efficient performances, leading ISU with seven points on 3-of-3 shooting in the first. ISU held the Cowgirls to 4-of-21 shooting in the period, leading 24-8 after one.

The Cyclone lead got up to 19 at 33-14 before the Cowgirls were able to reel ISU to back within 12 at 35-23. However, Donarski stepped up with back-t-back 3-pointers to re-up the ISU advantage to 18, helping guide the Cyclones to a 43-27 halftime lead.

Kane got a putback to end a nearly six-minute field goal slump for ISU early in the fourth, and Donarski followed that with a coast-to-coast pull-up 3-pointer to bring the Cyclone lead back to 19 at 65-46. That was more than enough of a margin going forward, with the Cyclones able to take care of business and secure their ninth-straight victory.

Players of Note
Lexi Donarski had her fourth 20-point game of the season, finishing with a game-high 23 points on 8-of-19 shooting, which included five 3-pointers. She also had six rebounds and four assists.

Morgan Kane had another one of the best games of her ISU career, securing her second double-double with 15 points and 10 rebounds. She has now been in double figures for scoring eight times this season after having previously not done it in her Cyclone career. 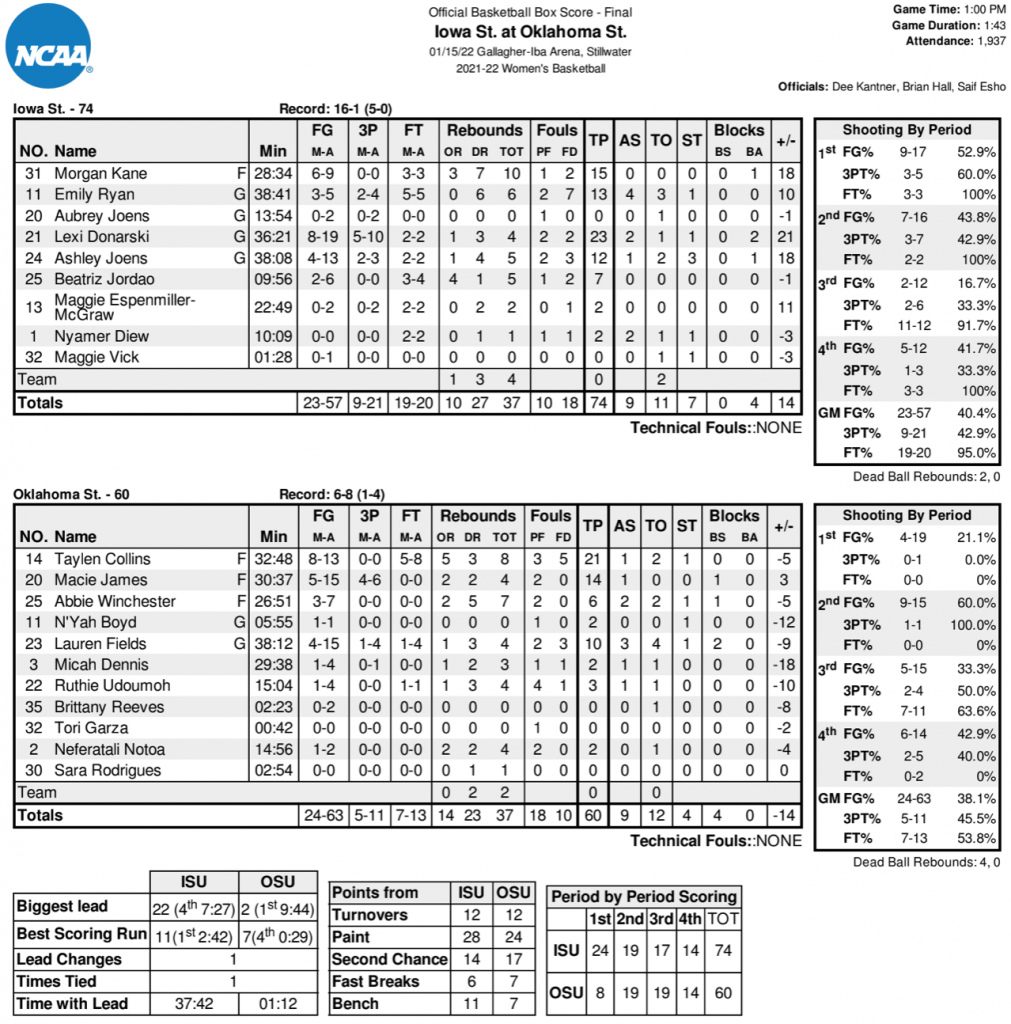