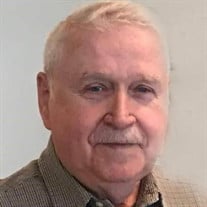 Funeral services will be 10:30 a.m. Thursday, December 30, 2021, at the Fertile Church of Christ, 3493 Eagle Ave., Fertile, with Rev. Ken Olson and Dennis Ganz officiating. Burial will be at Memorial Park Cemetery in Mason City.

In lieu of customary remembrances, family suggests memorial contributions to Fertile Church of Christ to be used for the Northeast Iowa Christian Service Camp Building Project.

A graduate of Fertile High School, class of 1957, Jack worked all his life as a mechanic. He worked at the Shell Station in Mason City, Sears in Mason City for 19 years, and was a partner with his brother, Earl and nephew, Dan, in Miller’s Diesel and Automotive. He always took great pride in his work.