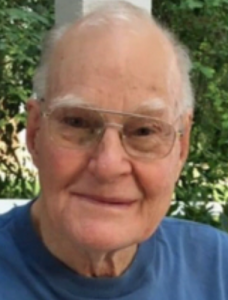 A memorial service will be held 10:30 a.m., Friday, January 7, 2022 at Britt Zion Church of the Nazarene with Rev. Chris Burrell officiating. Military rites will be conducted by the Britt Veterans Ceremonial Unit. Inurnment will be at Corwith Cemetery.

Visitation will be one hour prior to services at the church.

James Carl Johnson, the son of David and Dagmar (Sorensen) Johnson, was born March 26, 1930 on a farm near Corwith.  He was baptized at the United Methodist Church in Corwith.  Jim attended the rural schools near Corwith until the eighth grade and helped his father on the farm.  He served his country in the U.S. Army during the Korean War.  Following his honorable discharge, he returned to Corwith and continued to help his family on the farm.  On June 14, 1958 he married Glenda Eppens at the Little Brown Church in Nashua. They lived on the family farm until moving to Garner in 1973. Jim worked at Marting Manufacturing for two years and Winnebago Industries for 25 years.  In 1991 he and Glenda moved to Britt. He enjoyed watching sports and John Wayne movies. He was a member of the Britt Zion Church of the Nazarene.