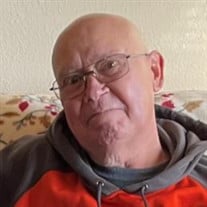 Ronald “Pete” Holland, age 63, of Humboldt passed away on Friday December 17, 2021 at his home. Visitation will be 4:00 – 7:00 PM on Tuesday at the Lentz Funeral Home in Humboldt. Those attending are encouraged to wear Hawkeye apparel.

Ronald Eugene Holland, the son of Raymond and Francis (Alberta) Holland, was born on August 28, 1958 in Fort Dodge. Pete graduated from Humboldt High School in 1976. He began working at Chantland at 18. He was a welding foreman and retired in 2014. On July 3, 1986 Pete married Darcy Walker in Elk Point, SD. They were later divorced. Pete enjoyed golfing and loved spending time with his grandchildren, they were his pride and joy. He was an Avid Hawkeye and Vikings fan.

Pete is survived by his son, Davis Holland of Humboldt; daughter, Kirstie (Robbye) Ron of Fort Dodge; grandsons, Rio, Andre and Nico Ron; sisters, Juli Holland of Humboldt and Deb (Ralph) Graham of Albany, OR; nieces, Pam and Carrie Graham; and a nephew, Kyle Hafford. He was preceded in death by his parents and a sister in infancy, Sheryl.