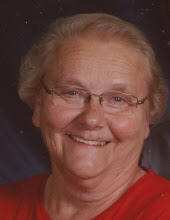 Norma Elaine Ostmo, 79, passed away peacefully at home in Mason City on December 20. A visitation for Norma will be held at Major-Erickson, 111 North Pennsylvania Ave, Mason City, IA from 4:00 to 6:00 p.m. on Thursday. Per her wishes, a private family funeral service will be held on Friday.

Norma was born February 27, 1942, to Roy and Helen (Smith) Butcher. She grew up on their family farm near Rockwell, Iowa and graduated from Rockwell High School in 1960. After graduation, Norma attended Hamilton Business College in Mason City.

Norma met the love of her life and forever partner, James Ostmo, at the Clear Lake Roller Rink. They were married at First United Methodist Church in Mason City on August 3, 1963. At that time, Jim and Norma moved to the Ostmo family farm in rural Joice where they started their family. They were blessed with three daughters, Sheryl, Kathy and Nancy.

Although Jim and Norma continued to farm and raise livestock, they moved to Lake Mills when the girls began school. Norma worked at the Lake Mills Community School lunchroom for many years while also working alongside Jim on the farm. They were very active members of Salem Lutheran Church in Lake Mills.

Jim and Norma continued to farm together until their retirement in 2003 when they moved to Mason City. Shortly after arriving, Jim began working part-time at the YMCA. As true partners in life, Norma could be found at the Y whenever Jim was working. She found a community of friends there that brought her much joy. They continued to visit the Y regularly until Norma’s health deteriorated. As members of the Mason City community they were active members of Trinity Lutheran Church.

Family was everything to Norma. She especially loved being a grandmother. She was an integral part of their lives until the day of her passing.

She is also survived by her sister Jane Lauen, sister-in-law Ann Butcher, sisters and brothers-in-law Gisle and JoAnne Bartleson and Gene and Charlene Ostmo, as well as many nieces and nephews.

She was preceded in death by her parents, her brother, Glenn Butcher, infant brother Kenneth Butcher, and her father- and mother-in law, Oscar and Irene Ostmo.