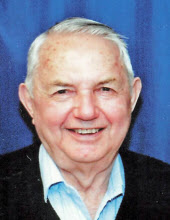 Visitation will be from 4 to 6 p.m., Wednesday, December 1st at Cataldo Funeral Chapel, 160 E. 4th St., Garner and will resume one hour prior to services at the church on Thursday.

Edward Roy Kotz, the son of Louis and Tilda (Ashland) Kotz, was born November 11, 1923 southeast of Ventura. He attended schools in the Mason City, Clear Lake and Garner areas. He later received his high school diploma from the department of public instruction at the University of Hawaii. Ed served his country during WW II in the U.S. Navy. He attended Naval Air Tech Centers in Norman, OK, St. Louis, MO and Honolulu Naval Air Station. Upon his honorable discharge, he returned home to Iowa and farmed north of Garner for several years. He married Lois Boehnke at St. John’s Lutheran Church. They lived in Clear Lake where they raised their family. Ed owned and operated the Barrel Drive In from 1959 until 1985 with locations in Clear Lake, West Union and Cherokee, Iowa. He later moved to Grinnell, Iowa before returning to Clear Lake in May of 2021 to be closer to family. Ed’s passion was flying. He was an excellent pilot and 35 year member of the Lake Flyers at the Mason City Airport. He enjoyed hunting and fishing.

He was a longtime member of St. John’s Lutheran Church where he served on the church council, former board member of the Iowa Restaurant Association, Clear Lake Noon Lions Club and Clear Lake Chamber of Commerce serving as past president. He also was a lifetime member of the Garner American Legion Post No. 256.

He was preceded in death by his parents; two wives, Irene Thompson and Bernadine Wiltfang; and two infant sons.