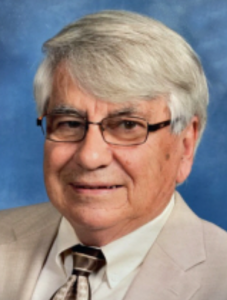 Allan D. Formanek, 83, of Garner passed away peacefully Thursday, November 4, 2021 at his home in Garner after a long battle with Parkinson’s Disease.

A funeral mass will be held 10:30 a.m., Tuesday, November 9, 2021 at St. Wenceslaus Catholic Church in Duncan with Rev. Fr. Joseph Sevcik officiating. The service will be livestreamed on the Cataldo Funeral Home Facebook page. Burial will be at St. John’s Catholic Cemetery in Duncan.

Visitation will be held from 4 to 7 p.m., Monday at Cataldo Funeral Chapel, 160 E. 4th St., Garner with a Catholic Workman rosary at 3:30 p.m. and a Scriptural wake service at 7 p.m. Visitation will continue one hour prior to services at the church.

Masks are suggested at the visitation and funeral mass.

Memorials may be directed to St. Wenceslaus Catholic Church or St. Croix Hospice.

Allan Dwayne Formanek, was born on the family farm near Hayfield, Iowa on February 19, 1938 to Lewis, Sr. and Clara (Jakoubek) Formanek. He was a proud Hayfield Hornet and enjoyed the basketball team’s journey to the State High School playoffs, using his new movie camera to record the event. He was also an active 4-H member. Allan married beautiful, feisty Barbara Ellen Wilson on September 11, 1958 in Duncan, Iowa. They had two girls and lived on the farm until buying Al’s Grocery and relocating to Duncan. Another relocation occurred years later when they bought the A&W Restaurant in Britt. Allan volunteered as a fireman for several years in Britt. He also was active in the Britt Chamber of Commerce, the Catholic Workman, and the association of A&W owners. He was a warm, loving father who provided wisdom, patience and encouragement. Although Allan had the misfortune of losing Barb to cancer in 2005, he was blessed again to find another beauty when Patty Kuhlers entered his life and the two married in 2008. They had many good times in Iowa and Phoenix and Patty was a wonderful mate and caregiver in the last few years. Allan was grateful to be part of Patty’s family, who graciously welcomed him.

He was preceded in death by his first wife, Barbara; parents; siblings and their spouses, Wilhemina and Roy Rensink, Mercedes and Raymond Nowak, Helen and Robert Townsend, Lewis Formanek, Jr.; in-laws, Janet and Rob Arndt and Nancy and Denny Ward; and Patty’s granddaughter, Brianne Pals.