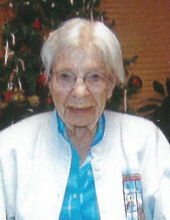 A memorial service for Ardis Wiltse will be held at 11:00 am on Saturday, October 23, 2021 at Hauser Weishaar Funeral Home with Sister Diana Blong from Immaculate Conception Church in Charles City officiating. Inurnment will follow at Riverside Cemetery in Charles City.

A gathering of family and friends will be held one hour prior to the service on Saturday, October 23, 2021 at Hauser Weishaar Funeral Home.

Ardis Mary (Einck) Wiltse was born on March 18, 1921 in Charles City to Anthony and Katherine (Doerr) Einck. When she was 10 years old, her parents moved to a farm in Chickasaw County where she grew up and received her education. She returned to Charles City and worked at Ninth Avenue Grocery Store and Ben Franklin until it closed. She was married to Robert Wiltse and has a son Wayne Wiltse of Racine, Wisconsin.

Living family members include her son, Wayne; sisters, Ila Rose Mihm of New Hampton and Helen Einck of Charles City; and sister-in-law, Margaret Einck of Denver, Iowa; along with many nieces and nephews.