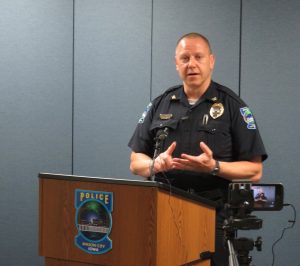 MASON CITY – A social media post from the child of a police officer deemed ‘racist’ is protected by free speech, Mason City police say, after conferring with the Cerro Gordo county attorney.

At approximately noon today, the Mason City Police Department was made aware of a social media post that was made by an immediate family member of one of their officers. “This post was offensive, racist, and done in poor taste. The Mason City Police Department does not support this action in any way and has worked diligently to build relationships in our community and to improve the diversity of our organization,” police said in a statement this afternoon.

The statement went on to say “we have conferred with the Cerro Gordo County Attorney about this matter. At this time MCPD believes the content of the post is protected by First Amendment free speech. While offensive to nearly everyone who has seen it, First Amendment speech is limited only in time place and manner by law enforcement authorities. The Clear Lake Police Department has been asked to further investigate to avoid a conflict of interest. Anyone with information about this incident is asked to call CLPD at 641-357-2186.

Police also say they have been in communication with the Mason City Community School District in the aftermath of this post. “We are working with school officials to insure the ongoing safety of student and staff at Mason City schools.”

Furthermore, the police statement from Chief Jeff Brinkley reads, “For those in our community who are impacted by this post, we empathize with your anger and disgust. We encourage parents to talk to their children about their use of social media and its potential impact on them, their fiends and classmates and their community We. as people. are more alike than different. but sometimes need to take intentional steps to learn more about those who are different than us. My hope is that, in time. we can grow from this and be better and stronger than we are today.”

NIT was alerted to the social media post earlier in the day. It involved two young ladies discussing the use of the “N” word. There was a local uproar and viral effect once the video began being shared locally.  The name of the officer will not be reported here.  NIT will not be sharing the video, as it deals with children and a word that should never be used.