Reportedly, President Donald Trump said at a recent meeting that Puerto Rico – recently devastated by hurricanes – has received too much aid, even as the Caribbean island home to 3.7 million people struggles to rebuild from disaster.  In response to the President’s alleged statements, Puerto Rico Governor Ricardo Rossello unleashed a scathing letter Tuesday: 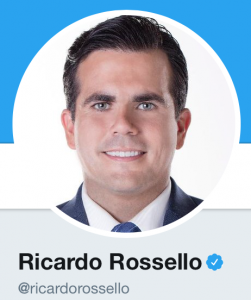 The comments attributed to Donald Trump today by senators from his own party are below the dignity of a sitting President of the United States. They continue to lack empathy, are irresponsible, regrettable and, above all, unjustified.

“I want to be very clear. Not a single federal dollar has been used to make debt payments. This has been the most transparent recovery in the history of the United States, providing unprecedented access and collaboration with federal agencies. In fact, just yesterday we reached an agreement with FEMA on the transition of responsibilities for the reimbursement of recovery funds. An agreement predicated on the acknowledgment by the federal government that appropriate fiscal controls are in fact established.

“I can only assume that Trump is receiving misleading information from his own staff. I have now made several requests to meet with the President to discuss Puerto Rico’s recovery and reconstruction, but up to this day we haven’t received a confirmation or a date, even though Trump told me we would meet after his visit to Vietnam earlier this year.

“I invite the President to stop listening to ignorant and completely wrong advice. Instead he should come to Puerto Rico to hear firsthand from the people on the ground. I invite him to put all of the resources at his disposal to help Americans in Puerto Rico, like he did for Texas and Alabama. No more, no less.

Of course, today the world knows the unpleasant truth that Puerto Rico is a colonial territory of the United States and are well aware of the democratic deficiencies we endure: We are not allowed to vote for our President nor have voting representation in Congress. Even as we have asked democratically for statehood twice in the past seven years, the federal government has delayed their responsibility to act.

People from all over the nation, and the world, have witnessed the inequalities Americans face on the island. The federal response and its treatment during these past months in the aftermath of Hurricane Maria is clear evidence of our second-class citizenship.

“Mr. President: Enough with the insults and demeaning mischaracterizations. We are not your political adversaries: we are your citizens.