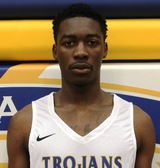 The No. 14 NIACC men’s basketball team won its 10th straight game with a come-from-behind 86-75 victory over Iowa Central in an ICCAC contest Wednesday night in the NIACC gym. The Trojans trailed 66-60 with 8:30 left in the second half but the they outscored the Tritons 26-9 the rest of the way to keep their winning streak alive.

The 10-game winning streak is tied for the fourth longest in school history and longest since the 2006-07 team also put together a 10-game win streak.

NIACC’s last loss was a 100-76 defeat at the hands of Iowa Western on Nov. 5 in Council Bluffs.

NIACC (11-2 overall, 2-0 in the ICCAC) was led by freshman Wendell Matthews, who scored 23 points with 10 rebounds, a career-best six assists, two steals and one block. It was Matthews’ sixth double-double of the season.

NIACC returns to action next Wednesday (Jan. 16) at DMACC in an ICCAC contest.