CHARLES CITY – Police say a Charles City woman was “swerving all over the road” when she was stopped and arrested for felony drunk driving Tuesday afternoon.

The trouble began on Tuesday afternoon around 3 PM.  Officers with the Charles City police department stopped a vehicle at 4th Avenue and D Street after a report was received indicating the vehicle was swerving all over the road.  As a result of the stop and investigation, 51-year-old Teresa Augustus of Charles City was arrested on a charge of felony third-offense operating while intoxicated, driving while suspended and failure to maintain control.

Augustus was guilty of drunk driving twice previously in Chickasaw county.  She remains jailed at this time, awaiting court appearances. 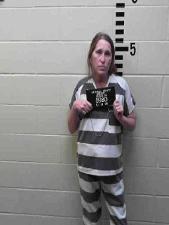