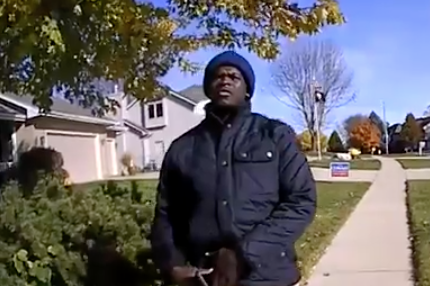 WEST DES MOINES – Police in West Des Moines today attempted to explain how late in October, a black campaign worker was stopped, detained and frisked by police after he refused to tell an officer his name and answer other questions after an alleged complaint was called in.

The African-American man, 24-year-old Keilon Hill of Louisiana, was charged with harassment for not fully cooperating with officers and reportedly awaits a court date and has a lawyer representing him.

Video body cam footage was also released by police (see end of story) along with an explanation of the incident:

The West Des Moines Police Department today released the body worn camera recording of an arrest made October 29, 2018. A resident called police to report a man was suspicious in the neighborhood because he was taking pictures of houses, had papers in his hands, was not approaching houses and was leaning on a mailbox. The caller described the suspicious person’s clothing, sex, and race. Officer Ray responded to this call for service and arrived moments later.

Officer Ray was in duty uniform and arrived in a marked patrol car. Nearby, he found the suspicious person as described by the caller. Officer Ray approached him, identified himself as a police officer and explained why he was speaking to Hill. Hill concealed the papers he had been holding under his coat. At that time, Officer Ray did not know why Hill was in the area. West Des Moines city ordinance requires solicitors to have a permit and Officer Ray tried to assess if Hill was soliciting in violation of that ordinance.

Hill refused to answer Officer Ray’s questions and started walking away. Officer Ray told Hill to stop several times and Hill refused. Officer Ray repeatedly instructed Hill to stop and tried to explain why the conversation was occurring. Eventually, Officer Ray arrested Hill and charged him with Harassment of a Public Official which reads, “Any person who willfully prevents or attempts to prevent any public officer or employee from performing the officer’s or employee’s duty commits a simple misdemeanor.” Officer Ray did have a body worn camera which recorded this interaction.

On November 12th at approximately 12:00 PM information was released to the media with a cell phone video of the incident. As a result, it appears in that video and information release that Officer Ray stopped Mr. Hill for no reason, labelled him as suspicious, and ultimately arrested him for failing to provide Officer Ray with some personal information.

Our department is extremely sensitive to all issues surrounding racial and bias based policing. As such, as a department we have attended several trainings in the past and will continue to attend bias based policing in the future. We have a biased base policing policy that will not tolerate any action based on race. Most recently we have set up a system to monitor and warn of any potential racially based policing action. If we review and suspect or determine racial bias in our services, our department will take immediate action to the level expected of our officers.

Our department has participated in various activities in our community and in the metro to be a part of the conversations of racial concerns. We have met with community leaders and various groups to discuss our current relationships and how we can partner together to continue to build on what has been established.

Our community, all of our community, is important to us and we will make every effort to provide fair and impartial services. We have and will continue to build relationships between the police department and the community we serve.

Our policy does not allow us to release video of cases that are pending court proceedings. However, our city council’s Public Safety Committee members have expressed to the Chief of Police their interest in releasing the video to show all the facts surrounding the arrest of Mr. Hill. Today, the Chief of Police is releasing the entire recorded incident of that interaction. This is not a new precedent or change in policy, it is a request by Council with the support of the police department.

We ask our community to view the video with an open mind and to understand all the facts. We ask that you understand our stance on race related policing. And last, we ask for conversation that will unify our city as one community.

According to members of Iowa Citizens for Community Improvement, “a grassroots social justice organization”:

On Monday, October 29, 2018 at approximately 3:00 p.m., Keilon Hill was door canvassing for Rep. David Young. Mr. Hill, a resident of southern Louisiana, was employed by a super PAC working on behalf of Young. After Mr. Hill interviewed a resident, he sat down on a rock next to the sidewalk to write his notes, with his campaign pamphlets beside him.

Officer Ray followed Mr. Hill as he walked away and demanded he identify himself. Officer Ray repeated that Mr. Hill was a suspicious person. Mr. Hill asked repeatedly what crime he had committed, and Officer Ray could not provide a response. Mr. Hill declined to speak with Officer Ray further because he knew Iowa law does not require a person to identify themselves unless there is reasonable suspicion that criminal activity is afoot, and Mr. Hill was not up to anything illegal.

Because Mr. Hill declined to speak with him, Officer Ray arrested Mr. Hill for violating Iowa Code § 718.4. That statute makes it illegal to willfully prevent an officer from performing the officer’s duty. But the United States Supreme Court has held a person “may not be detained even momentarily without reasonable, objective grounds for doing so; and his refusal to listen or answer does not, without more, furnish those grounds.” Fla. v. Royer, 103 S. Ct. 1319, 1324 (1983). In other words, it is not illegal to refuse to interact with law enforcement when there is no reason for law enforcement to think that you’re doing something wrong.