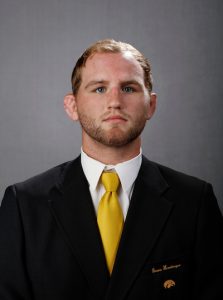 The win boosted Marinelli from No. 7 to No. 2 in the 165-pound national rankings. He is 13-0 overall with seven wins against ranked opponents, including five inside the top 10.

The Big Ten Conference weekly honor is Marinelli’s second and the Hawkeyes’ fifth this season. He was previously recognized Dec. 12. Michael Kemerer earned the honor Nov. 28 and Jan. 3, and Spencer Lee earned the honor Jan. 23.

The seventh-ranked Hawkeyes return to the mat Sunday at Iowa State in their final dual of the season. The annual Iowa Corn Cy-Hawk Series matchup begins at 2 p.m. (CT) at Hilton Coliseum.