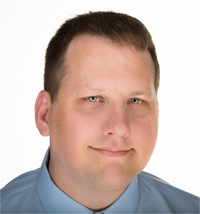 MASON CITY – Joshua Masson is pleased to formally announce his candidacy for the vacant 3rd Ward seat on the Mason City Council. Masson, 46, has been employed at Curries for the last 15 years as a Manufacturing Business Systems Analyst. He is a familiar face at City Council meetings and is proud to call Mason City home.

Masson holds a bachelor’s degree in mechanical engineering from the University of Rochester (New York). Upon graduation he entered into the military where he served for eight years as a combat engineer and demolitions instructor in the U.S. Army. He moved to Iowa in 2002, and has since earned an MBA from Upper Iowa University.

While in Mason City, Masson has volunteered with Relay for Life, and was an active member of the Mason City Jaycees, serving as both local chapter president and State President of the Iowa Jaycees.
Anyone wishing to contact him can do so at massonforthirdward@gmail.com.