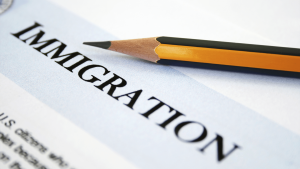 DES MOINES – Early on Tuesday, July 11, 2017, the Iowa Sanctuary Movement held a vigil in front of the Federal Building downtown to demonstrate its support for immigrant families in Iowa. Around three dozen people gathered at 7:00 am to stand in solidarity with immigrant families who are seeking safety in the United States.

Pastor Alejandro Alfaro-Santiz from Trinity Las Americas United Methodist Church offered an opening invocation and led the group in prayer as they joined hands asking for protection for a family that was headed into the Federal Building for an Immigration and Customs Enforcement (ICE) check-in appointment. “We want to show the immigrant community that the people of Iowa care about them and that congregations are standing up against unjust laws, working to keep families together and protecting those most vulnerable,” said Rev. Alfaro-Santiz.

Many families in Iowa are in search of asylum protection after having received death threats amid on-going violence in Central America. Faith communities in Iowa are leading a movement offering refuge for those who fear or face deportation under the Trump Administration’s expanded enforcement. The Iowa Sanctuary Movement (www.iowasanctuary.org) is a statewide network of eleven faith communities offering sanctuary and standing alongside families during their interactions with ICE.

“We know ICE is separating many Latino families, forcing moms to be single parents, disrupting financial stability, and leaving children fatherless and traumatized,” said Maria Alcivar with American Friends Service Committee (AFSC) Iowa. “We hope that these public acts of solidarity, local welcoming city policies, and sanctuary spaces provided by churches around Iowa will create a sense of public support for immigrant communities in Iowa.”

17 Responses to Iowans hold vigil in support of immigrants