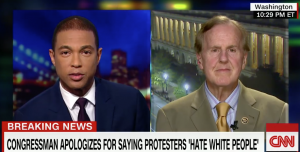 CHARLOTTE, NORTH CAROLINA – A Republican Congressman from North Carolina has apologized for saying black people “hate white people, because white people are successful and they’re not.”

The comments were made by Representative Robert Pittenger during an interview on the BBC Thursday, September 22, 2016. The BBC asked to speak with Congressman Pittenger regarding the riots in his hometown, Charlotte, North Carolina, that had ravaged the city for two straight nights after an un-armed black man was shot dead by police.

Rep. Pittenger, attempting to explain why the protests had turned into violent riots, said the protestors – many of them African-American – “hate white people because white people are successful and they’re not.” He went on to say “We’ve put people in bondage so that they can’t be all that they’re capable of being.”

After an uproar about his comments, later Thursday evening, Congressman Pittenger became aware that “one of his answers had caused offense”, and he issued this “heartfelt response”:

“What is taking place in my hometown right now breaks my heart. My anguish led me to respond to a reporter’s question in a way that I regret. The answer doesn’t reflect who I am. I was quoting statements made by angry protestors last night on national TV. My intent was to discuss the lack of economic mobility for African-Americans because of failed policies. I apologize to those I offended and hope we can bring peace and calm to Charlotte.

“My intent was to discuss the lack of economic mobility for African Americans because of failed policies. My answer to BBC doesn’t reflect who I am. I was quoting statements made by angry protesters last night on national TV.”