This news story was published on March 13, 2016.
Advertise on NIT • Subscribe to NIT 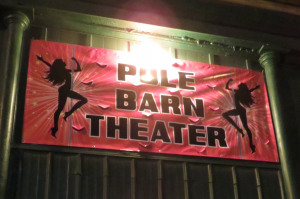 NORA SPRINGS, IOWA – A woman rumored to be an exotic dancer allegedly left two kids home alone while she performed at the local juice bar this weekend.

The Floyd county sheriff’s office tells NIT that an anonymous call was received late Saturday or early Sunday morning. The caller allegedly stated that a woman was working at the Pole Barn in Nora Springs and that she had left two kids home alone.

Floyd county sheriff Rick A. Lynch told NIT Sunday that “All I know is that it was the Nora Springs Police who handled the call”.

In a follow-up contact, a Floyd county deputy told NIT that Nora Springs police then investigated the call, which sheriff Lynch also said. The deputy tells NIT that no one was arrested, that he knew of, as a result of the incident.

According to the initial contact to NIT from a source, “Stripper (name redacted) living with (name redacted), got escorted out of the Pole Barn because a welfare check called in to Floyd Co. Sheriff revealed that (these two people) had been leaving (her) 2 young children without adult supervision for over 8+ (hours) while they were both working at the Barn. DHS is involved.”

NIT reached out to a bouncer at The Pole Barn, Aron Bierl, to see if he might have some information.

“Aron, I am the Publisher of NorthIowaToday.com. I’m getting people sending news tips here that a dancer at the Pole Barn was escorted out of the establishment by police because she left her kids home alone while she was working. Do you know anything about that?”

Mr. Bierl did not yet respond to the question.  He is facing a probation revocation hearing on April 18 in connection to a harassment charge.

NIT spoke to Aron Bierl Sunday afternoon.  He explains that the person who was questioned by police is not working at The Pole Barn.  NIT as also spoke to the woman who was questioned by Nora Springs police – who NIT won’t name at this time, as she was not charged with a crime – and she says she does not work there, despite sources saying she does.  She does live with Mr. Bierl at his home, he says, and that she has two children, ages 14 and 13 who were “home alone” with access to a cell phone.  She tells NIT her home is only 5 blocks from The Pole Barn.  She also says that police had her sit in a police car while they questioned her, and they had gone to her house and “banged on the windows” there, awakening her children.  They then questioned the children as to their safety.  DHS was notified, but she says they have not contacted her yet.  She says she is a “good mother” and “takes good care of her kids”.  She and Mr. Bierl have been together just a few weeks.  Other sources are telling NIT the children are actually 10 and 6 years old and that charges are coming.

In regards to the harassment charges he has faced, Mr. Bierl tells NIT that he tried to check on the welfare of his young son and was accused of violating the no-contact order a judge set.

Stay tuned for more news next week on this developing situation.