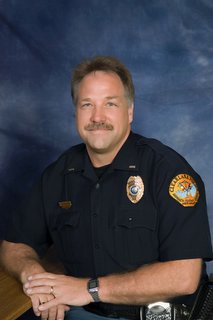 CLEAR LAKE – Clear Lake’s Chief of Police has passed away.

Rex McChesney lost a battle with cancer Friday after being placed in hospice care.

The city of Clear Lake released a statement:

“It is with deep regret and a heavy heart that we can confirm that the City of Clear Lake’s Police Chief, Rex McChesney, passed away this morning after a courageous battle against cancer, at the age of 52. The City was notified by the family early this morning.”

“Rex was instrumental in overseeing the construction of the newly renovated City Police Department facility and left an enduring legacy of public service. Our thoughts and prayers are with his family at this most difficult time”, stated Mayor Nelson P. Crabb.

Earlier this year, Mayor Crabb recommended (then) Lieutenant Rex McChesney for confirmation to the post of interim Chief of Police by the City Council. He was formally appointed at the March 3rd City Council meeting.

Mr. McChesney was a life long resident of Clear Lake, graduating from Clear Lake High School in 1981. Upon graduating, he attended NIACC where he received an Associates degree in Lake Enforcement.

He began his law enforcement career in 1983 as a Correctional Officer for the Cerro Gordo County Sheriff’s Office. In 1986, he began working for the Clear Lake Police Department and attended the Iowa Law Enforcement Academy in 1987. He worked as a patrol officer for the department until he was promoted to the rank of Lieutenant in 2006 and as Interim Police Chief in March of 2014.

Rex resided in Clear Lake with his wife Jodie. They have two adult sons, Seth and Sean.

11 Responses to Clear Lake Chief of Police passes away