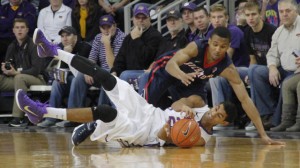 CEDAR FALLS – The University of Northern Iowa men’s basketball scored its seventh consecutive win to begin the 2014-15 season with a 55-50 win over the Richmond Spiders on Sunday in the McLeod Center.

The Panthers were led on Sunday by senior Seth Tuttle’s 17th career double-double. The Sheffield, Iowa, native scored 17 points and grabbed 10 rebounds against the Spiders. Junior guard Wes Washpun knocked in all four 3-point shots he attempted and scored 16 points off the bench for the Panthers.

The Panthers were most defensive in the first half when the home squad limited the Spiders to 15 points and 27.3 percent shooting. UNI held Richmond to four points through the games first 10 minutes. The Spiders closed to within 20-15 with 3:41 left in the half on a 3-pointer by Terry Allen.

But the Panthers then held the Spiders without a point the rest of the first half and opened up a 30-15 lead at the intermission.

Richmond posted 35 second-half point and shot 45 percent from the field in the final 20 minutes. The Spiders closed to within four points at 48-44 and 50-46 before the Panthers were able to put the game away at the foul line. Junior Matt Bohannon made 5-of-6 free throws in the final minute to provide the margin of victory, 55-50.

UNI will play again Sat., Dec. 6, at home against the George Mason Patriots in the McLeod Center. Tip is set for 7 p.m. for the GMU contest.