MASON CITY – A convicted thief was at it again Sunday, this time taking her talents to the Mason City Wal-Mart.

Angela Mae Thorson, age 37 of Lake Mills, was detained by Wal-Mart loss prevention after 11:00 AM Sunday morning. Police were called, and after an investigation, Thorson was arrested and charged with theft in the third degree due to her criminal history,

Thorson plead guilty to fifth degree theft in 2013 after that charge was brought by Mason City police. She is being held in the county jail on $2,000 bond. 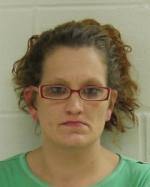