ROCKWELL – A Mason City man was arrested by Rockwell police after an incident there last week.

Spencer Carlson Kehm, age 20, was arrested by Rockwell Police Chief Richard Whitney on Wednesday, August 27 at about 4:32 after a property damage incident and car accident on the north edge of town. Kehn was arrested and taken to the Cerro Gordo County Jail where he was booked on charges of driving on the wrong side of street, careless driving, no insurance, no driver’ license, following too closely, passing near a bridge, unsafe passing, improper overtaking on the right, failure to yield, passing on wrong side, possession of drug paraphernalia, and leaving the scene of a personal injury accident.

Kehm was released from jail the next day and a layer, Richard Tompkins, was appointed to represent him. An October 1, 2014 court date was set. 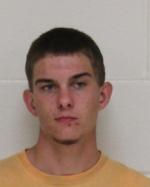