Khatallah charged with federal offenses in 2012 attack on U.S. compound in Benghazi

WASHINGTON – Ahmed Abu Khatallah, aka Ahmed Mukatalah, a Libyan national approximately 43 years of age, has been charged for his alleged participation in the Sept. 11, 2012, attack on the U.S. Special Mission and Annex in Benghazi, Libya, which resulted in the deaths of four Americans.

“Our nation’s memory is long, and our reach is far,” said U.S. Attorney General Eric Holder. “The arrest of Ahmed Abu Khatallah represents a significant milestone in our efforts to ensure justice is served for the heinous and cowardly attack on the U.S. diplomatic facility in Benghazi. Since that attack – which caused the deaths of Ambassador J. Christopher Stevens, Sean Smith, Tyrone Woods and Glen Doherty – we have conducted a thorough, unrelenting investigation, across continents, to find the perpetrators. The arrest of Khatallah proves that the U.S. government will expend any effort necessary to pursue terrorists who harm our citizens. Khatallah currently faces criminal charges on three counts, and we retain the option of adding additional charges in the coming days. Even as we begin the process of putting Khatallah on trial and seeking his conviction before a jury, our investigation will remain ongoing as we work to identify and arrest any co-conspirators. This is our pledge; we owe the victims of the Benghazi attack and their loved ones nothing less.”

“The terrorist attacks on our diplomatic facilities in Benghazi were an affront to our nation and heartbreaking for the families of the four courageous Americans who perished that day,” said John Carlin, Assistant Attorney General for the National Security Division. “Capturing Ahmed Abu Khatallah was a critical step toward bringing him to justice, and we will not rest in our pursuit of the others who attacked our facilities and killed our citizens.”

“In July 2013, Ahmed Abu Khatallah was charged in a sealed criminal complaint in the District of Columbia for his alleged role in the attacks that resulted in the murders of four American citizens, including Ambassador Christopher Stevens, in Benghazi, Libya,” said U.S. Attorney Ronald C. Machen Jr. for the District of Columbia. “Khatallah will now face justice in an American courtroom. We remain committed to holding accountable all of those responsible for the murders of those brave U.S. citizens who were serving our country in Libya.”

The charges were announced upon the unsealing of a three-count criminal complaint. The lead count in the complaint is a death-eligible offense. The complaint, which was filed under seal on July 15, 2013, in the United States District Court for the District of Columbia, charges Khatallah with:

— Killing a person in the course of an attack on a federal facility involving the use of a firearm and dangerous weapon and attempting and conspiring to do the same.

— Providing, attempting and conspiring to provide material support to terrorists resulting in death.
— Discharging, brandishing, using, carrying and possession of a firearm during and in relation to a crime of violence.

Khatallah is in U.S. custody, and upon his arrival to the U.S. he will be promptly presented before a federal judge in Washington, D.C., and appointed counsel.

Charges contained in criminal complaints are merely allegations that a defendant has committed a violation of criminal laws, and every defendant is presumed innocent until, and unless, proven guilty.

The case is being investigated by the FBI’s New York Field Office with substantial assistance from various other government agencies. The case is being prosecuted by the U.S. Attorney’s Office for the District of Columbia and the National Security Division of the U.S. Department of Justice. 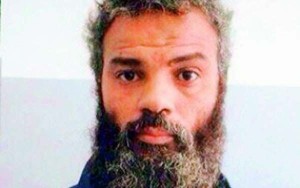