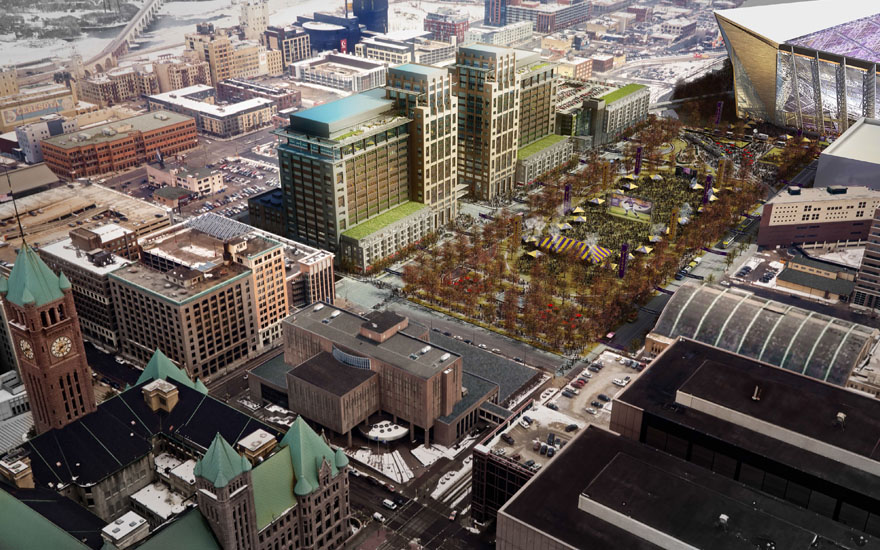 MINNEAPOLIS – The NFL announced today that Minnesota was selected to host Super Bowl LII. The February 2018 contest will be held in the new Minnesota Stadium set to open in 2016. The Minnesota Super Bowl Bid Committee delivered the successful presentation to all 32 NFL owners in a presentation today in Atlanta following the final bid submission on May 7. Centered on the theme, “Built for the Bold,” the bid presentation highlighted the new, iconic and bold stadium as a centerpiece, and included the many bold moves Minnesotans have made in creating a destination that is ready to host the world’s biggest game.

“We are thrilled to bring the Super Bowl back to Minnesota,” said Richard Davis, chief executive officer of U.S. Bank and bid committee co-chair. “We succeeded in making the best case to the NFL owners by pointing out the many strengths our region offers – a tremendous entertainment and hospitality industry, strong connectivity with both our light rail and skyway systems, and perhaps most important, a new, iconic stadium that will be among the best in the country.”

“We appreciate the collaborative effort from Minnesota’s business and community leadership in putting together this winning bid,” said Vikings Owner/President Mark Wilf. “It was evident to me and my brother Zygi that the other NFL owners were extremely impressed with everything Minnesota had to offer, and we have no doubt they will be even more excited with what the community will deliver in February 2018.”

“The Super Bowl is the most-watched annual event in the world,” said Doug Baker, chief executive officer of Ecolab and bid committee co-chair. “This unprecedented audience, along with the 100,000 people who come to experience it in person, will see this vibrant, engaged community that celebrates all that winter can be when we showcase everything from outdoor activities on Nicollet Mall’s Super Bowl Boulevard to an ice palace at the Saint Paul Winter Carnival. We plan to set the bar high for all northern destinations that host the Super Bowl.”

“I’m most excited by the opportunity to show the world our community’s remarkable legacy project that will enhance the lives of Minnesota’s children and set a precedent for the future of the game,” said Marilyn Carlson Nelson, former chair and chief executive officer of Carlson Companies and bid committee co-chair. “It’s also a joy to know that the 29,000 hospitality workers in Minneapolis and many more throughout the region will be able to welcome the world to our state once again in 2018. The innovation, hospitality and boldness that are Minnesota will leave a mark on the NFL and the Super Bowl for many years to come.”

The game will be held in the new Minnesota Multi-Purpose Stadium, currently under construction and set to open in July 2016. The stadium, which will typically seat 65,400, will be expandable to 72,000 seats for the 2018 Super Bowl. With a clear ETFE roof and five of the largest glass pivoting doors in the world, fans will experience an outdoor feel in a climate-controlled environment.

“Attending fans and the world will see the best of Minnesota – from the sunlit view of downtown Minneapolis through the stadium windows to the many activities happening throughout the region,” said Minnesota Sports Facilities Authority Chair Michele Kelm-Helgen. “The new stadium and adjacent two-block park that is being developed are incredible assets that will offer amazing fan experiences.”

By securing the bid, Minnesota beat contenders New Orleans and Indianapolis, both cities that have hosted recent Super Bowls. “We are honored to have been in the company of two such fine competitors,” said Melvin Tennant, president and CEO, Meet Minneapolis. “Both New Orleans and Indianapolis had extremely strong bids and their reputations precede them. We are excited to join their ranks in hosting a Super Bowl of the 21st Century.”