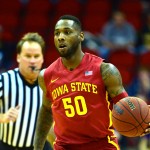 AMES, Iowa – Iowa State senior Melvin Ejim has been named a United State Basketball Writers Association Second-Team All-American, the organization announced Wednesday. Ejim is also a finalist for the Oscar Robertson Trophy, which is presented by the USBWA.

It is the second All-America honor for Ejim, who was recognized as an NBCSports.com third-team pick on Monday. Ejim is the first USBWA All-American for Iowa State since Jamaal Tinsley in 2001.

Ejim, a forward from Toronto, Ontario, averaged 18.2 points and 8.6 rebounds en route to being named the Big 12 Player of the Year. Ejim has scored in double figures in 25 of the 28 games he’s played this season, including a Big 12 record 48 points against TCU.

In the regular-season finale against Oklahoma State, Ejim became just the fourth player in Big 12 history to score 1,500 points and grab 1,000 rebounds.

Ejim and teammate DeAndre Kane were also named All-District 8 First Team by the National Association of Basketball Coaches on Wednesday.