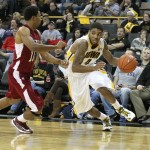 IOWA CITY – University of Iowa senior Roy Devyn Marble was named Wednesday to the five-player District 7 first team by the National Association of Basketball Coaches (NABC). Today’s honor is the third in as many days for the Hawkeye guard; Marble was named first team All-Big Ten on Monday and recognized on the USBWA All-District VI team Tuesday.

Marble, a native of Southfield, Mich., became the first Hawkeye since Adam Haluska in 2007 to garner all-district accolades. He is averaging 17 points, 3.4 rebounds, 3.5 assists and 1.8 steals per game through 31 games. He is the only conference player to average 17 or more points and collect more than 55 steals. In all games, Marble ranks fifth in the league in steals, sixth in scoring and 10th in assists. In Big Ten games only, he ranked second in scoring (18.3).

The 252 student-athletes, including Marble, from 25 districts, are eligible for the NABC Coaches’ Division I All-America teams.