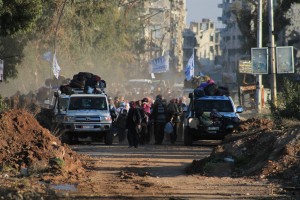 HOMS, SYRIA – “Where have you been? What took you so long? Why is it only after a year that the UN would try to reach us knowing that we have been here for that long?”

These are the questions that greeted Yacoub El Hillo, the United Nations Humanitarian Coordinator in Syria and his team early last month when they were finally able to reach the Old City of Homs, which had been under siege and cut off from aid for nearly two years.

“It was shocking, it was overwhelming, it was painful,” Mr. El Hillo said as he recalled what he witnessed that day upon entering the city – from the human misery of malnourished and traumatized men, women and children to the destruction wrought on one of the world’s most ancient cities. The world said ‘never again’ many times and the world is saying it in the case of Syria. We should do something about it. We should stop this madness. We should stop this conflict.

“When we came out I described the experience as: it was a day from hell. And we were there only for one day. Yet the people living inside the Old City of Homs go through this every day.”

Mr. El Hillo, a Sudanese national who has been in his post for seven months, spoke to the UN News Centre while in New York, as the conflict in Syria this week marks the grim anniversary of entering its fourth year.

Civilians have borne the brunt of the conflict, which has so far claimed well over 100,000 lives, and left more than 9.3 million people in need of assistance inside Syria, including at least 6.5 million who are internally displaced. The conflict has also spawned a refugee crisis in which nearly 2.5 million people have are being sheltered in neighbouring countries.

In early February, a three-day ceasefire enabled the delivery of aid into the Old City of Homs, where some 2,500 Syrians were trapped without assistance for nearly two years in what had become an iconic symbol of the suffering endured by civilians in the three-year war’s relentless bombardments and sieges. The humanitarian operation also enabled the evacuation of close to 1,400 civilians from the city.

“It is true that between all these ancient buildings that made the Old City of Homs, they dug passages so that they could walk through the buildings and not on the streets to avoid sniper fire. It is an appalling situation.”

UN agencies and partners remain committed to staying and delivering humanitarian aid in Syria, despite insecurity and lack of access. There have been constant appeals to the parties to the conflict to facilitate safe and unhindered delivery of humanitarian aid to all people in need, including in hard-to-reach and besieged areas. Despite repeated requests and negotiations, there has only been limited improvement in recent months in reaching those besieged.

“It is complex,” Mr. El Hillo noted, recalling that the talks took three weeks before the UN and partners were able to enter the Old City of Homs. “It is complex because it entails talking to everybody. Of course we are in regular contact, if not daily contact, with the Government.

“But in moments like this when we want to reach people in areas beyond the control of the Government, where the opposition armed groups are in control, we also need to talk to everybody, including the armed groups, and that’s exactly what we did in the case of the Old City of Homs.”

As the conflict continues, human suffering is growing and people are finding it more and more difficult to cope, he stated. Three years of fighting has left the country devastated – its industrial capacity has been reduced by 80 per cent; half the Syrian population is living below the poverty line; 2.5 million jobs have been lost; and unemployment is at 48 per cent.

It is a situation that should not have happened, Mr. El Hillo emphasized. But it did happen, and it should not be allowed to continue.

“It is not good that we continue to sit back and hope that this is going to resolve itself, by itself. It is not going to happen, it is only going to get worse and complicated. So there has to be that commitment to really bring this to a stop through political dialogue.”