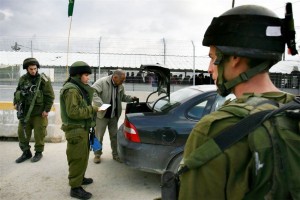 Israeli soldiers search a Palestinian’s car at the Hawera checkpoint outside the town of Nablus in the West Bank. Photo: IRIN/Kobi Wolf (file)

NAMBLUS – A senior United Nations official in Jerusalem today voiced his deep concern at reports that three Palestinians died in separate security-related incidents in the West Bank within a 24-hour period, and called for restraint by all concerned.

“We urge that thorough investigations be conducted into all such cases, welcoming steps taken to this effect, and that accountability for any violations of international law be ensured,” Deputy Special Coordinator for the Middle East Peace Process, James W. Rawley, said in a statement.

“We call on all concerned to demonstrate restraint and work towards de-escalating tensions,” he added.

According to media reports, Jordanian judge Raed Zeiter was shot by Israeli soldiers on Monday after an altercation at the Allenby Bridge border crossing as he was making his way to the West Bank.

Several hours after Mr. Zeiter’s death, Israeli troops reportedly shot dead a 20-year-old Palestinian near the West Bank city of Ramallah who they said had been throwing stones at soldiers.