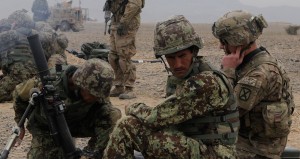 The 4th Brigade, 201st Afghan National Army Corps soldiers, alongside a mentor from 2nd Battalion, 30th Infantry Regiment, recoil from the pop of a fired 60mm mortar round during a live-fire exercise at Forward Operating Base Gamberi during their final day of training Jan. 8, 2014. The ANA are much better equipped to secure their country during the upcoming presidential elections with the skills and knowledge to engage their enemies with indirect fire. The 2nd Battalion is a part of 4th Brigade Combat Team, 10th Mountain Division. (U.S. Army Photo by Sgt. Eric Provost, Task Force Patriot PAO)

KABUL, Afghanistan – The first four months of 2014 will have a decisive impact on the future of Afghanistan, setting the conditions for the post-ISAF mission and the “Decade of Transformation.” The peaceful transfer of political power as a result of the upcoming election, on 5 April 2014, will provide the necessary strategic momentum for sustaining the progress made during the ISAF mission.

The absence of a Bilateral Security Agreement (BSA) has increased uncertainty among Afghans, regional neighbors, donor countries and the international community. This lack of certainty has also created unhelpful hedging behavior in the region. Economic indicators are apparent, such as reduced foreign investment, lower trade and falling government revenues. The Afghan people continue to express the need for continued, broader international community support, evident in the widespread Afghan popular sentiment for signing the BSA, endorsed by the Loya Jirga.

The Afghan National Security Forces (ANSF) emerged from the 2013 summer fighting season as a competent and confident force, responsible for leading the provision of security in Afghanistan; they also enjoy the support and confidence of the majority of the Afghan people. This winter, we focused on setting the conditions for 2014 by preparing the ANSF for the upcoming election and the fighting season. We continue to strive to ensure that the progress the ANSF have made thus far is sustainable in 2014 and beyond.

Overall, surveys suggest security perceptions remain generally stable across Afghanistan; however, work remains to be done and continued ambiguity regarding the signing of the BSA may adversely affect these perceptions. The signing of the BSA, followed by the North Atlantic Treaty Organization (NATO) Status of Forces Agreement (SOFA), and the decision on the Resolute Support mission, will strengthen the relationship between Afghanistan, the United States, NATO and its partner nations as well as provide the legal framework for our continued commitment to the Afghan people.

The ANSF are almost fully fielded and have shown improvement in the areas of combined arms operations, utilization of indirect fire systems, and organic casualty evacuation. Progress continues to be demonstrated by the ANSF, who now execute combat operations across the country, displaying an ability to plan, support and sustain complex operations. Furthermore, ANSF interaction with the Afghan media and local communities during operations highlighted to the populace the ability of Afghan forces to provide security. However, progress is not evenly distributed across the force and is not yet fully sustainable.

The Afghan Security Institutions (ASI) and ANSF still have capability gaps, where the requisite capability is nascent or nonexistent and also developmental shortfalls where significant further development is required to achieve proficiency and requisite effectiveness. ASI Capability gaps exist in planning, programming, multi-year budgeting and execution and transparency, accountability and oversight. ASI developmental shortfalls are apparent in logistics, acquisition and financial management; strategic plans and policy and human resource management. Despite the Ministry of Defense (MoD) and the Ministry of Interior (MoI) making progress in both budget execution and accountability, critical support functions – particularly the logistics and facilities departments – still require Coalition assistance and are expected to continue to require support for the near future.

ANSF capability gaps include close air support and intelligence, surveillance and reconnaissance (ISR), while development shortfalls exist in in command and control, leadership, combined arms integration, training and sustainment. In particular, improvements still need to be made in counter-improvised explosive device (C-IED), medical, fire support coordination and counter-terrorism capabilities. The ASI and ANSF continue to rely on ISAF support to mitigate these gaps and shortfalls.

In mid-2013, ISAF completed transition to a train, advise and assist (TAA) mission as the ANSF took the lead responsibility for security across the country. The end of 2013 saw ISAF change emphasis from unit level advising to functionally-based Security Force Assistance (SFA) at Corps and ministerial levels, with emphases on problem solving efforts and sustainable relationships. SFA will remain our primary effort and focus into Resolute Support, the planned NATO-led mission to train, advise and assist the ANSF after 2014. These efforts, designed to make progress sustainable, are fundamental for security transition and will set the conditions for Resolute Support.

The Taliban-led insurgency failed to achieve its stated operational objectives for the 2013 summer fighting season. While ultimately, it has been unable to exploit the reduced ISAF presence to generate operational or strategic momentum, the insurgency draws strength from its belief that NATO will not be in Afghanistan after 2014. It has used attacks in an attempt to influence the perceptions of the Afghan people, international community, its own fighters, supporters and potential donors. Insurgents and criminal elements are still capable of projecting violence into urban areas from rural areas, threatening freedom of movement along major highways, contesting government control in some areas and conducting high profile attacks and assassinations. Yet the Afghan population widely rejects the Taliban, whose support level amongst the populace remains below 15 per cent, consequently undermining insurgent efforts to expand influence.

Remnants of Al Qaeda and other foreign militant groups remain within the border districts, while sanctuaries outside Afghanistan afford the insurgency refuge. In an environment where their existence is not directly threatened, sanctuary allows both the reconstitution, training and equipping of enemy forces, such as the Taliban and Haqqani Network, as well as freedom for insurgent leaders to plan future attacks.

ISAF personnel continue to maintain positive day-to-day relationships with their peers within the ASIs and remain committed to working together in pursuit of shared strategic objectives. The true strength of the relationship is demonstrated by the lively discussions conducted between ISAF and the MoD over budgets, infrastructure, civilianization and maintenance; robust debate now takes place without the relationship being adversely affected and positive outcomes are achieved. Despite a strained relationship between the Coalition and GIRoA at the political level, ISAF’s relationship with the security ministries remains strong.

Amongst the Afghan populace, three quarters of survey respondents support having an ISAF presence in Afghanistan beyond 2014, with a plurality believing that ISAF is helping, rather than hindering, Afghanistan’s development.

Ultimately, the ability of the Afghan government and security ministries to conduct a transparent, inclusive and credible election, acceptable to the Afghan people in April 2014, remains crucial.

The election is scheduled to occur on 5 April, and ISAF is prepared to support the ANSF, including during a run-off, if necessary. With the ANSF having assumed nationwide lead for security in June 2013, the Afghans already have a solid foundation for electoral preparations, which are now well advanced, relative to the 2009 presidential election.

Assessments regarding the ability of the ANSF to successfully secure the election remain encouraging. The MoI-led planning demonstrates the vital importance and scrutiny that election security has at all levels. Total security forces will number approximately 425,000, including Afghan and Coalition forces – well above the 250,000 forces that were present during the 2009 elections.

The ANSF continue to demonstrate vastly improved capabilities, as displayed by the security provision for the Loya Jirga. Additionally, both ANA and ANP have demonstrated their ability to secure election polling sites toward the end of the period, securing multiple such sites in Nangahar Province; these operations highlighted the benefits of layered security, which will be used during the election period. Although much remains to be done, the ANSF have the confidence, capability and intent to secure the vast majority of polling sites in the weeks leading up to and on election day.

Afghanistan’s neighbors share common concerns about the post-2014 security environment and have vested interests in regional stability. This winter, GIRoA has conducted a range of relationship-building activities with many of its neighbors, including Pakistan, India, Iran and Russia.

Our objective remains to establish a constructive and effective relationship between the militaries of Afghani stan and Pakistan. During the fall, we saw some positive political developments which provided space for the military-to-military relationship to grow. President Karzai’s visit to Pakistan in August was followed with a visit by Pakistan’s Prime Minister Sharif to Kabul in November. Leaders on both sides appear committed to developing a military-to-military relationship.

India continues to improve its relationship with Afghanistan and remains willing to provide funds and material support for non-lethal equipment and to train the ANSF in India.

Afghanistan’s relations with Iran continue to develop and Russia has provided economic aid and training for select members of the ANA.

Redeployment is fundamental to ISAF’s efforts to posture the force for Resolute Support and is a visual manifestation of Afghanistan’s growing capability as a sovereign nation, displaying that responsibility for security is increasingly in the hands of our Afghan partners. The gradual reduction of forces and capabilities still allow for the necessary support to the ANSF during the election period and the remainder of the ISAF mission. Force protection remains a critical priority, requiring the continued dedication of ISAF resources, reducing the number of troops available to perform SFA specific roles.

Today’s force posture is designed to support yesterday’s TAA mission and does not fully support our current needs for functionally-based SFA, which has seen the focus shift from developing ANSF combat capability at the unit level to ensuring that end-to-end processes are established across at both ministerial and Corps level; in doing so we will sustain the ANSF and deliver transparency, accountability and oversight. This requires different advising skill sets, to ensure that the force is optimized for the remainder of 2014 and the follow-on mission. It is imperative that, along with alterations to the current command and control construct, nations carefully screen and select advisors who understand the environment, ensuring the candidates have the requisite experience, knowledge and temperament to operate effectively in this environment. Fully resourcing and training these forces and individuals remains critical to continued ANSF development.

With our Coalition presence, the ANSF will continue to improve. As the ANSF demonstrate their enhanced capabilities during the upcoming election and beyond, insurgents will see the contradiction between their propaganda and reality.

Ultimately, military actions provide the necessary time and space for renewed diplomatic and economic initiatives to take hold. The 2014 election provides an opportunity for the first democratic transition of power in Afghanistan. The Coalition presence provides a measure of confidence and certainty for political transition to occur and reduces hedging behaviors that may limit or reduce participation in the election process.

Whilst a delay in signing the BSA is causing uncertainty, once signed the BSA and the NATO SOFA will provide the necessary certainty by setting the framework for our continued commitment to Afghanistan. Additionally, as the international community demonstrates its continued engagement with the region, regional actors will be encouraged to commit to real progress in relations with Afghanistan.