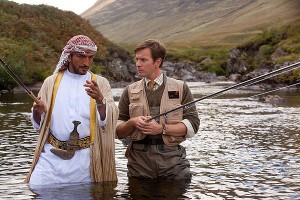 Still from Salmon Fishing in Yemen

MASON CITY – The Charles H. MacNider Art Museum’s 2014 winter film series, Films in February, Movies in March (Some in January, Too), ends on Saturday, March 8 at 2 p.m. with Salmon Fishing in Yemen. The film will be shown in the Museum’s Salsbury Room. Admission is FREE and open to the public. Popcorn will be provided.

Salmon Fishing in Yemen is a delightful story of hope and perseverance. When Britain’s leading fisheries expert is approached by a consultant to help realize a sheikh’s vision of bringing the sport of fly-fishing to the desert, he immediately thinks the project is both absurd and unachievable. But when the Prime Minister’s overzealous press secretary latches on to it as a “good will” story, this unlikely team will put it all on the line and embark on an upstream journey of faith and fish to prove the impossible, possible.

Salmon Fishing in Yemen (2012), a feature film, is rated PG-13 (some violence and sexual content, brief language) and is 86 minutes long. It is in English and Arabic with English Subtitles and is sponsored by Bob and Carrie Berg.