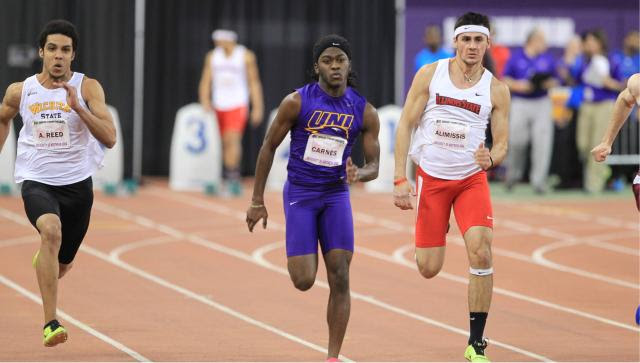 CEDAR FALLS, Iowa – The University of Northern Iowa wrapped up day one of competition at the 2014 MVC Indoor Track and Field Championships inside the UNI-Dome today, with true freshman Brandon Carnes turning in two top performances for the Panthers.

Carnes won his first-career MVC individual title after picking up the gold in the men’s 200 meter dash. Carnes put up a time of 21.66 for the win and a new personal-best . Carnes then went on to qualify for the 60 meter dash finals with a new PR time of 6.74, tying him for fourth all-time at UNI.

The Panthers opened up the day of competition with the multi-events. Highlighting the women’s pentathlon was Paige Knodle notching the second fastest 60 meter hurdle time in school history, coming in with a time of 8.57 while battling an injury throughout the pentathlon.

Rachel Peth placed seventh overall in the pentathlon with a new personal-best score of 3,524. She came away with a big personal-best in the women’s shot put and tied for fifth in the high jump with a leap of 5-03.75. Chaley Rath rounded out the Panthers pentathlon competitors grabbing PRs in the 60 meter hurdles and the shot put.

Ben Lindaman and Jon Rus finished the first day of heptathlon competition, with both of them combining for six personal-bests. Lindaman won the shot put competition while earning PRs in the 60 meters, long jump and the high jump. Rus also finished with a personal record in the long jump along with the shot put and high jump.

Maddie Beeler will compete in the women’s 400 meter finals after finishing with a personal record time of 56.32. The Panthers had two men qualify for the finals in the 400 meters after both Jesse Davenport and Newtoff moved on to the final, including Newtoff’s PR time of 49.45.

Amber Clock and Brette Correy will represent the Panther women in the 800 meter finals with true freshman Correy notching a new personal-best time of 2:13.43. Timauntay Jones will run in the men’s final with his qualifying PR time of 1:53.83.

Alex Wilson cruised to a first place finish in the women’s mile preliminary race, running a time of 4:56.53 to seal her place in the finals. Calvin Kibby will also represent the men in the finals after his qualifying time of 4:26.96.

The Panthers shined in the weight throw competition with Justin Baker placing fourth overall after throwing for a huge personal-best of 66-01.75. His toss is now fourth all-time at UNI while earning team points for UNI. In the women’s competition, Jamie Lindstrom also scored some team points for the Panthers, notching a PR throw of 58-05.25.

Knodle wrapped up the field events for UNI, competing in the women’s long jump. She placed second overall to earn all-conference and notched the fifth best jump in UNI history of 19-04.00.

“We had a great day on the track,” head coach Dan Steele said. “We got a lot of people through to the finals tomorrow and I was pleased with our performance.”

The Panthers will return to action at 9:30 a.m. tomorrow with the conclusion of the men’s heptathlon. Field events will begin at 11:30 a.m. with the triple jump and the track events will kick-off at 1:45 p.m. with the women’s mile run final.