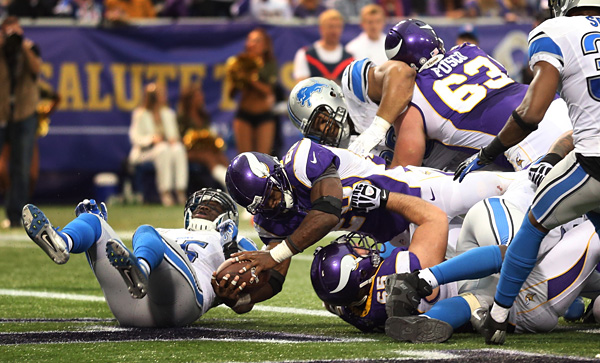 MINNEAPOLIS — Adrian Peterson continued his remarkable return from a torn knee ligament Sunday, and he and the Minnesota Vikings dealt the Detroit Lions’ fading playoff hopes a blow in the process.

Peterson ran for 171 yards on 27 carries and scored a back-breaking 61-yard touchdown midway through the fourth quarter as the Vikings beat the Lions for the second time this season, 34-24, at Mall of America Field.

The Lions (4-5) squandered an opportunity to take control of the sixth and final NFC playoff spot Sunday and fell to 0-3 in the NFC North.

They play six of their final seven games against teams with winning records and have a difficult stretch ahead with games against the Packers and Texans over the next 11 days. They’ll likely need five or six more wins to earn a second straight playoff berth.

Peterson, the NFL’s leading rusher, powered his way over, around and through the Lions defense Sunday, but he was far from the only Viking to have his way.

Quarterback Christian Ponder, who’d thrown for less than 75 yards in two of Minnesota’s last three games, completed 24 of 32 passes against a short-handed defense for 221 yards and two touchdowns.

Rookie Jarius Wright, playing his first NFL game in place of the injured Percy Harvin, caught his first career pass on 54-yard bomb on third-and-10 early in the game and put the Vikings out front to stay two plays later on a 3-yard touchdown.

And tight end Kyle Rudolph finished with seven catches for 64 yards and walked into the end zone on a 20-yard pass 45 seconds into the fourth quarter.

The Vikings (6-4) scored the game’s first 10 points and led 13-3 at halftime, holding Matthew Stafford and the Lions’ offense to just 115 yards of offense in the first half.

The Lions cut their deficit to 24-17 early in the fourth quarter on a 1-yard Stafford pass to Titus Young, but Peterson scored two plays later to turn momentum Minnesota’s favor.

Calvin Johnson fumbled on the Lions’ next offensive snaps, and the Vikings added a field goal to seal the win.

Johnson caught 12 passes for a season-high 207 yards and scored a late touchdown, his first from Stafford this year.

Stafford finished 28 of 42 for 329 yards, with much of his production once again waiting until the fourth quarter.