Romney: Country one day away from ‘a new beginning’ 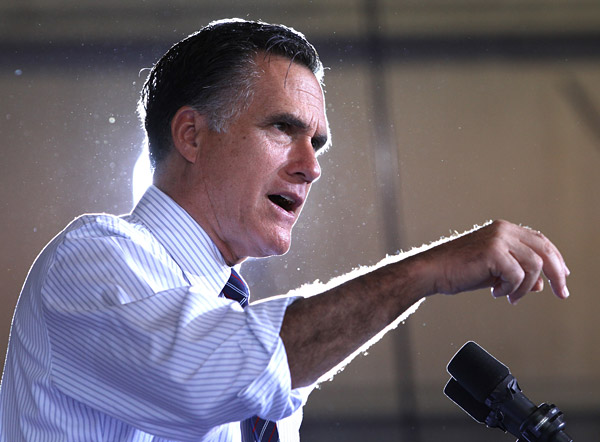 SANFORD, Fla. — Mitt Romney’s sprint through five rallies in four states began on a misty morning here along the vaunted I-4 corridor, a fitting start since the race could come down to the voters here in the heavily populated stretch from Tampa to Orlando.

For the former Massachusetts governor it has been what he refers to, almost affectionately, as “long days and short nights” on Sunday. He arrived in Florida around 1 a.m. local time, six hours before the doors were set to open at the airplane hangar here, and had his usual predawn wakeup call. But he walked briskly up on to the stage, slapping high-fives along the way.

“This is quite a gathering today. This is quite a welcome that you’ve provided me. Your voices are not just heard in this hangar, they’re being heard all over the nation. And even though Ann is in a different city this morning, they are being felt — your voices — in both of our hearts,” he said.

Over the past few days, his crowds have met him with a countdown chant: “Three. More. Days.” to “Two. More. Days.” On Monday, Romney had the luxury of adding a new word to the mix — Tomorrow — which he must have mentioned several dozen times.

“We can begin a better tomorrow, tomorrow, and with the help of the people in Florida, that’s exactly what’s going to happen,” he said.

He launched his usual critique of President Barack Obama, who he says failed to solve America’s challenges because he “cared more about a liberal agenda than about repairing the economy.” And he urged voters to get out and talk to their neighbors, particularly those with Obama-Biden yard signs, about his plans for the next four years.

“Look, I’m happy to sit down and discuss this with anyone who’d like to, but almost every measure the president took made it harder for the economy to recover and it hurt our fellow Americans,” Romney said. “We’re not just talking about a handful of people. We’re talking 23 million Americans are struggling to find a good job. One in six Americans are poor.”

But he also sounded the theme of bipartisanship — as he has religiously in recent days — calling for a return to the motto of “United we stand.”

“This unity is a fundamental principle of America. We’ve got to restore it. And so we’re one day away from a fresh start.”

“One day away from the first day of a new beginning,” the candidate said.