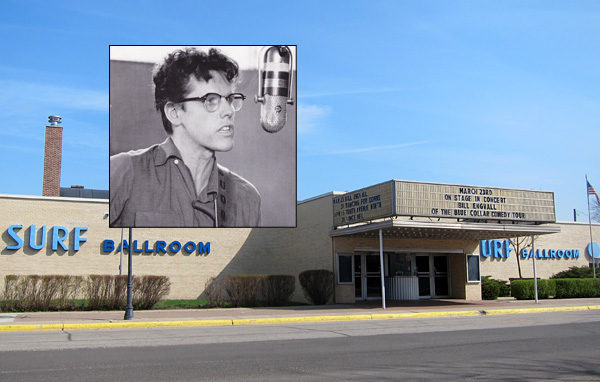 CLEAR LAKE, IA – The Surf Ballroom & Museum announced today the artists who are scheduled to appear at the 2013 Winter Dance Party event, scheduled for January 31st-February 2nd.  “We are extremely excited to announce this year’s lineup.  More thought and consideration has been put into this year’s program than ever before as we look to the future of the event,” stated Surf Ballroom & Museum Board President Jeff Nicholas.  Laurie Lietz, Executive Director, added, “The international exposure gained in 2009 during our Fifty Winters Later event has piqued the interest of many successful contemporary artists who wish to come to the Surf to pay tribute to their fallen stars.  We have shaped a three-day celebration that combines authentic and original fifties music and musicians with the fun and excitement of a live-music sock hop, all culminating in a very authentic tribute concert on Saturday night.  The Tribute concert will feature an all-star contingency of rock ‘n roll greats and the music they made famous while allowing them to pay respect to their greatest musical influences.”

Gary Busey’s excitement surrounding his involvement in this year’s event continues to grow as the date draws near. “The honor of doing a concert at the Surf Ballroom in tribute to Charles Hardin Holley (Buddy Holly) is a miracle and a blessing. To be put in a position of being a messenger of his spirit and talent and his truth is incredible. When I sing the songs, Buddy’s spirit will be with me,” said Busey.

Scheduled to appear are:

Winter Dance Party Family Sock Hop with entertainment by Denny & The DC Drifters of Austin, Minnesota. Advance Tickets are $7.00 (Please note that this is a separate ticket from the Thurs.-Sat. ticket!)

Peter Asher expressed his genuine enthusiasm when asked about his involvement in the 2013 Winter Dance Party. “I am looking forward so much to returning to the Surf Ballroom to play and sing and talk and listen in honour of Buddy Holly.  Indeed, not only am I proud to be part of any tribute to his music, but I owe Buddy’s memory a particular debt of gratitude on this occasion.  We members of the so-called “British Invasion” were united in the first place by our love for great American music and for the songs of Buddy Holly in particular,” he said.  “Without Buddy and his genius, I would not have this special anniversary occasion to look forward to at all – and it reunites me with old friends like Eric Burdon, Denny Laine and Terry Sylvester.  Eric was probably the most soulful British singer of the era. Denny has an angelic voice, an extraordinary history and “Say You Don’t Mind” remains an underappreciated masterpiece.  And who but the irrepressible Mr. Sylvester could have been in TWO of my favourite bands of the day, The Swinging Blue Jeans AND The Hollies?  I cannot wait to join not only my friends but all the other Holly fans for a joyous and musical celebration,” Asher concluded.

Advance tickets for the 2013 event will be sold for $110.00 each and are valid for the evenings of Thursday, January 31st through Saturday, February 2nd.  Both tickets and seating for the event will be sold on a first-come, first-served basis.  Seating for the event is priced at $60 for a 4-person booth, $90 for a 6-person booth and $150 for a table which seats 10-people.  You must purchase a minimum of 4 tickets to reserve a 4 person booth, 6 tickets to reserve a 6 person booth and 8 tickets to reserve a 10 person table on the floor.  The booths and tables will be reserved in your name for all 3 evenings of entertainment.  Tickets for the event are non-refundable and the entertainment lineup is subject to change.  Tickets and seating reservations may be purchased online at the Surf Ballroom’s website (www.surfballroom.com) or by calling the Surf’s box office at (641) 357-6151 beginning at 8:00 a.m. on Wednesday, November 7th.

A very limited quantity of VIP tickets will also be available for $250 each. Each VIP ticket will include admission to all Surf Ballroom sponsored events that weekend including nightly entertainment and seating in the VIP bar area Jan. 30th-Feb. 2nd. For the most current information about the event, please visit: www.surfballroom.com.