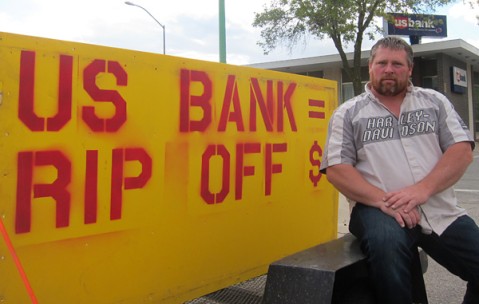 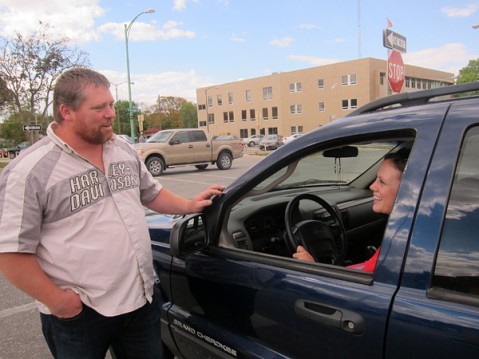 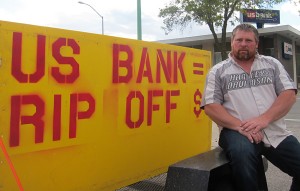 John Choate was back Friday in Mason City taking on the big bank.

Choate had been in Mason City on Tuesday voicing his dissatisfaction with the service he received at a U.S. Bank branch, and he picked up where he left off on Friday.

“I’m back,” Choate said with a chuckle, waiving to people in cars passing by on South Washington Avenue at about 3 o’clock.

“The response is even better today,” he said.  “Everyone’s real friendly, and several have shared with me stories like mine.  Some told me how the  bank took money out of their accounts for no reason.

“One man told me how they took 9 cents out of his account and he went in to complain (at a different U.S. Bank branch).  He said they told him ‘it’s just 9 cents, why are you upset?'”

Choate explained that if the banks are taking “9 cents” or whatever small amount out of millions of peoples’ bank accounts, “that could be millions of dollars they are stealing.”

Choate started his day before noon at the U.S. Bank branch on South Illinois Avenue, “but there was a complaint and the Mason City police asked me to leave.  The officer was very friendly.”  Choate said he didn’t know who made the complaint.

He then came over to the downtown location, but couldn’t get his sign back where it was on Tuesday, directly in front of the bank.

“The employees have been parking there all day.  One leaves and another pulls right in, and they go inside the bank to work.”

A woman passing by in a blue SUV stopped to chat with Choate and say that she, too, has had issues at U.S. Bank with a checking account.

“They take the big check withdrawal first, then the small ones, and if they can get you with a fee on all those, they do it.” she explained.

When asked if this is the end of the line with his sign and voicing his concerns at U.S. Bank, Choate said “No.  Nope.  I’m not done at all.  I’ve got plans but I can’t talk about them now.  I hope to get some federal government involvement.” 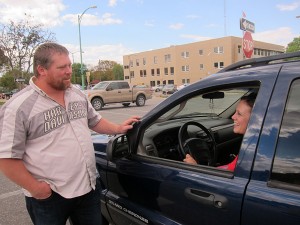 John Choate talks with a motorist passing by his sign in downtown Mason City on Friday afternoon. This woman also voiced displeasure at U.S. Bank policies.