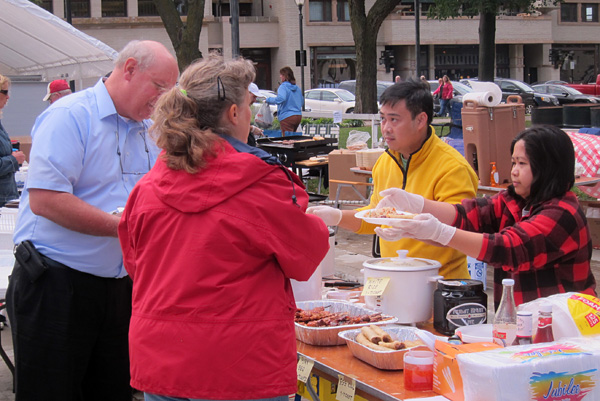 “The turnout is very satisfying,” said Dan Gipinski, NIDAT Development Chairman.  “The weather is great, it’s warming up, and people are hungry when it’s cooler,” Dan said with a laugh.  “We should see two to three thousand people through here today.”

During the event, “Embracing Diversity Awards” were handed out to recognize the outstanding corporation, service organization, and individual in the community for their commitment in understanding and appreciating diversity in the North Iowa area.  The award winners’ names were not immediately available.

There was food from many corners of the world, such as Mexican, Greek, Tanzanian, German, Filipino, Bosnian and Italian.  The vendors included Holy Family Men’s Club, Bethlehem Lutheran Church, Gilbert Sambalyegula, State Street Deli and Suzie Q among others.

An upgrade to the festivities this year was live music. (See video.)

Gipinski said NIDAT is looking at the possibility of a similar event in the spring.