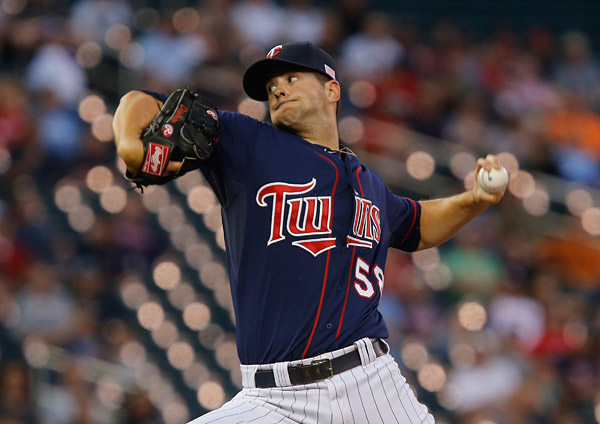 MINNEAPOLIS — Here on Tuesday night, finally, the Royals got a look at the Minnesota Twins that the rest of the league, if the standings are any indication, apparently sees much of the time.

This was a 9-1 laugher at Target Field behind seven shutout innings from rookie Will Smith before Aaron Crow and Louis Coleman finished up. Every starter reached base at least once in a balanced 15-hit attack.

The Royals opened the scoring against Twins rookie Scott Diamond with a three-run second inning by capitalizing for two runs after left fielder Josh Willingham lost a two-out fly in the lights.

A four-run eighth inning against relievers Luis Perdomo and Alex Burnett turned the game into a rout. So, yes, the Royals, at last, had an easy time against an opponent that shares the American League’s worst record.

The Royals won for the just the sixth time in 16 games against the Twins — and four of the previous five were by one or two runs.

Catcher Salvy Perez was a tour de force. His single started the three-run second inning. His sacrifice fly in the third extended the lead to 4-0, and he thwarted major Twins’ threats in the first and fifth innings by throwing out runners trying to steal.

Center fielder Lorenzo Cain was a homer shy of the cycle when he came to bat in the eighth but was hit in the head on the first pitch from reliever Luis Perdomo. It was a slider that didn’t slide.

Cain had time to turn his head and absorb the hit at the back base of the helmet. He remained in the game — and even joked with teammates on the way to first.

Smith, 5-7, showed some early rust in making his first appearance in 10 days but, with Perez’s help, worked around the difficulty. He gave up seven hits while throwing a career-high 107 pitches.

Neither Crow nor Coleman was sharp. Crow allowed a walk and two hits in the eighth but limited the damage to one run. Eric Hosmer got that run back with a two-out homer in the ninth.

Coleman yielded two singles in the ninth before ending the game.

Hosmer, Johnny Giavotella and Cain — the eight, nine and one hitters — each had three hits. Perez and Alcides Escobar had two.

Smith faced a lineup without Joe Mauer, who was scratched before the game because of back spasms. That’s no small deletion. Mauer’s .454 average against the Royals since the start of the 2010 season is the highest for any player against any opponent.

The Royals wasted Cain’s leadoff double in the first inning when Escobar popped a bunt to Diamond before Alex Gordon and Billy Butler grounded out.

Smith pitched out of a bigger jam in the Minnesota first after Ben Revere and Jamey Carroll opened the inning with singles. After Willingham took a third strike, the Twins tried for a double steal — but Perez threw out Carroll at second.

Revere reached third on the play but got no farther when Justin Morneau took a third strike.

The Royals struck for three runs in the second inning — with a little help.

Perez led off with a single and lumbered to second on a wild pitch and to third on a throwing error by catcher Ryan Doumit. Mike Moustakas struck out, but Jeff Francoeur pulled an RBI single through the left side for a 1-0 lead.

Hosmer’s single moved Francoeur to second before Giavotella struck out. Then came the big break: Willingham lost Cain’s routine fly to left in the lights, and the result was a two-run triple.

The Royals stretched their lead to 4-0 after Gordon started the third inning with a triple over Revere’s head in center. Perez’s one-out fly to deep left produced the run.

Smith worked around more trouble in the fourth after Willingham led off with a single, and Morneau battled back from a 1-2 hole for a walk. Smith escaped by getting Doumit to ground into a double play before striking out Trevor Plouffe.

The Royals loaded the bases with two outs in the fifth when Diamond sandwiched a Perez single with walks to Butler and Moustakas — but Francoeur grounded into a force at second.

Smith’s luck continued even after he started the fifth by walking Darin Mastroianni and Eduardo Escobar. After Pedro Florimon struck out, Perez turned the inning around by throwing out Mastroianni on an attempted steal of third.

Hosmer’s leadoff double in the eighth against Perdomo ignited a four-run inning. Giavotella followed with an RBI single up the middle before Perdomo then hit Cain in the back of the helmet with an up-and-in pitch — a scary moment.

The Twins replaced Perdomo with Burnett, who surrendered a hard grounder by Escobar past third that turned into a two-run triple. A one-out wild pitch scored Escobar for an 8-0 lead.