Adrian Peterson true to his word in victory Sunday 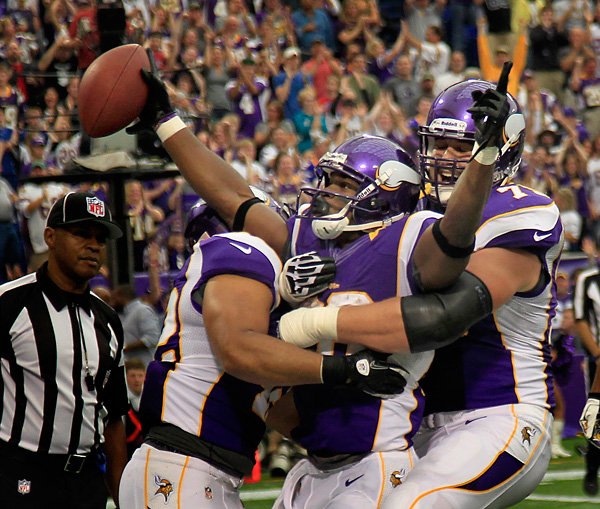 MINNEAPOLIS — If Adrian Peterson sends you an e-mail asking for money, claiming he’s a prince from a foreign land with a once-in-a-lifetime deal, cut him a check.

If he tells you eating 18 grapefruits a day will help you lose 20 pounds, rent a refrigerated truck and drive to Florida.

In a league overflowing with disinformation, Peterson’s word, from now on, is bullion. He earned the Better Business Bureau stamp of approval and his teammates’ awe on Sunday, leading the Minnesota Vikings to a victory as improbable and timely as his comeback.

Eight months after shredding his knee in a meaningless game in Washington, D.C., Peterson proved his vows to play in the Vikings opener were neither wishful thinking nor an unhealthy obsession, carrying 17 times for 84 yards and two touchdowns in the Vikings’ 26-23 overtime victory over Jacksonville.

Peterson promised this all along, but the Vikings, citing the severity of his injury, sowed doubt. Vikings coach Leslie Frazier admitted Sunday afternoon that

Peterson moved so well in practice that he held him out of preseason games not to preserve his health but because he had little to prove.

“We thought 10 to 15 carries would be great,” Frazier said. “He wound up with 17, which is just about where we wanted him to be.

“After some of those runs, I said, ‘I’m not sure you weren’t just faking that ACL.’ He looked pretty good to me.”

A recently mended anterior cruciate ligament couldn’t keep Peterson from breaking the franchise records for rushing yards. He has 6,836, 18 more than Robert Smith, whose taped tribute appeared on the scoreboard, with Smith urging Peterson to pursue the “other” Smith, Emmitt, who holds the NFL record with 18,355 yards.

That record, of course, is out of reach.

Unless Peterson says it isn’t.

“I pretty much knew that I’d be out playing today, but I had to keep it under wraps,” Peterson said.

He bolted for 20 yards on one run. On the other 16, he took the kind of beating that would have caused cringing on the Vikings sideline had they not believed he was fully healed.

“As the game went on, you asked him how he’s doing and he’s giving you a response,” Frazier said. “We talked about him being completely honest and not having any pride about if anything was bothering him, and we would pull him if we had to.

“It did encourage me, once we saw how he was handling things. Then we thought he could do a little more as the game went on.”

The Vikings called 28 designed runs; Peterson carried on 17 of them. He caught one pass for 3 yards and, when the Vikings used him as a decoy in an ill-fated series near the Jaguars goal line in the fourth quarter, he gestured to the bench and sprinted off in frustration.

He carried more often than anyone could have expected, and less than he would have liked. “It was less,” he said. “I was expecting to carry the load. I understand from their perspective how they’re looking at it, but from my perspective, I knew I would be ready to play. It’s a great way to start the season.”

We’ve always marveled at his conditioning and competitiveness. “And his genetics,” Frazier said.

What Peterson proved over the past eight months is that he’s just as spectacular grinding through a morning workout in the spring as he is stiff-arming a linebacker in the fall.

We knew he could defy gravity and inertia. We didn’t know, until Sunday, that he could ignore medical history and conventional wisdom.

He got hurt playing in a meaningless game for a bad team, and he pushed himself for eight months to play in a game that could prove meaningless against a mediocre opponent at the beginning of a rebuilding season.

We’re accustomed to athletes protecting their futures, their earning power.

What Peterson did Sunday, and has done for the past eight months, spoke of athletic bravery.

“It feels amazing,” he said.

He should have seen how it looked.