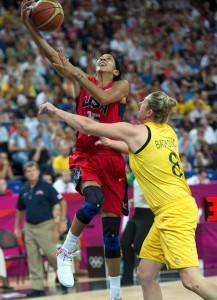 LONDON — The U.S. women’s basketball team has won games with its talent and tenacity, its defense and depth.

On Thursday, in a taut semifinal far closer than the final score indicated, it used all those qualities and added one more: its leadership.

(PHOTO: USA’s Candace Parker (15) scores over Australia’s Suzy Batkovic (8) during their semifinals game at the Basketball Arena at the North Greenwich Arena during the 2012 Summer Olympic Games in London, England, Thursday, August 9, 2012. USA defeated Australia 86-73 to advance to the Gold Medal game.)

The 86-73 victory over Australia pushed the U.S. into Saturday night’s gold-medal game against France and kept intact a 40-game Olympic winning streak and a bid for a fifth straight gold medal.

Beyond their court contributions, players credited Tamika Catchings, Sue Bird and Diana Taurasi for their strong words at halftime, when Australia led by four and answers for 6-foot-8 Elizabeth Cambage were scarce.

“They just told us to take it personal,” Tina Charles said of the three-time Olympians’ pep talk. “They told us we had to work harder.”

The U.S. hadn’t trailed at halftime in Olympic competition since facing Russia in the third game of the 2000 Sydney Games. And it had won its first six games here by an average of 37.7 points.

But the veterans’ words were as instructional as they were inspirational.

“There was really no panic,” Bird said. “We took what you could call Australia’s best shot, and we were only down four. We took that as a positive. Nobody had their head hanging low.”

Cambage scored 19 points on 8-for-12 shooting in the first half, during which Australia led by as many as seven and Candace Parker, Sylvia Fowles and Catchings all drew two fouls. Switching to a 2-3 zone often and doubling down in man-to-man situations, the U.S. held Cambage to one shot and no points after halftime.

“On the zone, I would love to say it was really strategic on my part, but it was more out of desperation,” U.S. coach Geno Auriemma said. “We couldn’t guard her.”

And then, suddenly, they could. Charles, who tied Taurasi with a team-high 14 points, started using her quickness to offset Cambage’s bulk. Undersized Asjha Jones took a turn and fared well. And the zone worked wonders. Australia shot 26.5 percent in the second half after posting a sizzling 60.6 percent before the break.

After the halftime veteran leadership, a youth movement prevailed. With Taurasi sidelined by four fouls, first-time Olympians Lindsay Whalen and Charles combined to score 10 straight points to turn a 56-55 deficit into a lead the U.S. never relinquished.

“They’re not rookies to us,” Bird said. “These aren’t 21-year-old kids who have never played international basketball.”

The U.S. had defeated Australia in the last three gold-medal games and drew on experience to maintain composure during their first true test of this tournament.

“You hope you have people in the locker room that are setting some kind of tone,” Auriemma said. “I’m not surprised that Sue and Diana and Tamika were able to convey to their teammates what happened and what needed to happen.”

Of course, saying and doing are two different things. But that’s what this team and this program have been all about — holding each other accountable, facing any challenge.

“It’s good,” Parker said of Australia’s tough test. “We would rather have this than any other way. You learn more about yourself in a game like this than you do when everything is falling and all your shots are going in.”