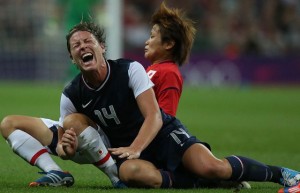 LONDON — The Americans had been pointing to this game for 389 days.

They awoke on the morning of July 18, 2011, hurting to the core after losing to Japan on penalty kicks in the World Cup final the day before and set out on the path to redemption.

It led them here, to London and the Olympic Games, to Wembley Stadium and the gold medal match against a rival they respected, even admired.

(PHOTO: The USA’s Abby Wambach (14) cries out as she is tackled by Japan midfielder Aya Miyama in the women’s soccer final at Wembley Stadium in London, England, in the Summer Games on Thursday, August 9, 2012. The U.S. won, 2-1.)

And on a glorious night for women’s soccer — for soccer, period — the U.S. held on to win, 2-1, Thursday in a tense match that lived up to its considerable hype.

“Last summer when we lost in heartbreaking fashion on penalty kicks in the World Cup, your team can go one way or another after something like that,” said forward Abby Wambach. “And I know that our team chose the right path.

“We knew that if we kept working hard and we kept believing in each other that no matter what obstacles presented themselves throughout this tournament — because we’ve had them — we would be able to get through it together.”

It was the third consecutive Olympic gold medal for the U.S. women and their fourth in five tries since women’s soccer made its debut at the 1996 Atlanta Games.

A crowd of 80,203 watched, the largest ever for a women’s soccer game at the Olympics.

“Coming out on the field and seeing 80,000 people there it was truly a once-in-a-lifetime experience,” said forward Alex Morgan. “I don’t know the next time I’ll play in front of that many passionate football lovers.

“The last time I came to Wembley, we watched England play here and I was just a spectator in the stands.”

The unlikely hero was Carli Lloyd, who lost her starting job before the Games started and got it back when Shannon Boxx was injured. Lloyd scored both goals, and Hope Solo was outstanding in goal, making several saves, including a big one in the 83rd minute.

“Hope is big-time,” Lloyd said. “She’s the best goalkeeper ever, I think, on the planet. Huge saves. That’s what she does. She comes up big in big moments. She’s just unbelievable.”

The Japanese focused on stopping Wambach and the 23-year-old Morgan, and for good reason. Wambach has scored 143 international goals, second on the U.S. all-time list to Mia Hamm. And the speedy Morgan has emerged this year as a big-time threat with a knack for scoring the huge goal.

It was Morgan who scored on a header in extra time to beat Canada, 4-3, in the semifinals.

In the eighth minute, Morgan took a touch pass from Tobin Heath and served the ball into the box; Wambach had her leg drawn back when Lloyd flashed in front of her and headed it past Japanese goalie Miho Fukumoto.

“My role tonight was an attacking type role, so I made sure I was getting in the box,” Lloyd said. “I saw Alex and anytime she’s in that final third I know she’s going to beat her player. She served a great ball. I saw that one coming and I just took off on a sprint and sprinted past Abby.”

Lloyd scored again in the 54th minute. With Morgan running wide and drawing a Japanese defender, Lloyd dribbled up the middle of the pitch, beat one defender and hooked a beautiful left-footed shot just inside the post.

“When Boxx went down, I knew that I had a big job and I had to seize the moment,” Lloyd said. “I worked really hard. When someone tells me I’m not good enough to start, I’m going to prove them wrong.”

The Japanese, perhaps the best team in the world at possessing the ball, attacked a sometimes disorganized U.S. back line throughout the match, with speedy midfielder Nahomi Kawasumi and forward Shinobu Ohno applying the pressure. Time and again, Solo was there to make the save.

But the pressure finally paid off for Japan in the 63rd minute, when Yuki Ogimi poked the ball in from point-blank range after a chaotic scrum in front of the net that ended with Solo sprawled on the ground helplessly to one side.

There was another scary moment in the 83rd minute, when Ohno stripped Christie Rampone and passed to Mana Iwabuchi. But Solo was there again, diving to her right to deflect Iwabuchi’s hard shot.

“I didn’t have time to panic at that point,” Rampone said. “You get stripped and you’re just trying to track back. I kind of saw my life flash in front of me but having Hope back there, she’s bound to get a great save and she did it for us.

“Losing a ball that late in the game and her making that great save I think motivates a team to finish it off.”

That’s exactly what the Americans did.

Soon afterward, they were standing on top of the podium, 18 hands over 18 hearts, singing the national anthem.

They had waited more than a year for precisely this moment. They not only envisioned it, they all but guaranteed it.

“We weren’t going to come home without another gold medal,” Lloyd said.

Wambach, who missed the 2008 Olympics after breaking her leg just before the start of the Games, summed up the night perfectly.

“Everything that’s happened up until now doesn’t matter because it’s all part of the process,” she said. “The fact that we’re champions means that we all committed to one central idea and that idea was believing in each other.

“I can’t explain it. It’s going down a goal, going down three times in one game (against Canada) and still knowing in each other the trust that we’re going to find a way.”