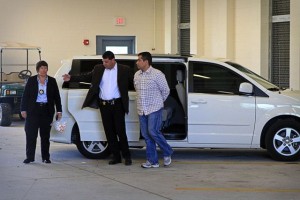 By David Breen and Jeff Weiner, The Orlando Sentinel –

ORLANDO, Fla. — George Zimmerman, the neighborhood-watch volunteer who became the focus of national attention after he shot Trayvon Martin on Feb. 26, returned to the Seminole County jail today in Sanford. He will remain there without bond until a judge decides whether he should be freed before his second-degree murder trial.

(PHOTO: George Zimmerman arrives at the Seminole County Jail after his bond was revoked in Sanford, Florida, on Sunday, June 3, 2012.)

Circuit Judge Kenneth Lester revoked Zimmerman’s bond during a Friday afternoon hearing, giving him 48 hours to turn himself in. He did so just before 1:45 p.m. Sunday.

Zimmerman, 28, did not respond to reporters’ questions as he was escorted, handcuffed, into the jail.

Zimmerman was to have a new mugshot taken and would be fingerprinted again. He will be kept in administrative confinement with a cell to himself, the same arrangement as before his release, Eslinger said.

Mark O’Mara, Zimmerman’s lawyer, said he expected to submit a motion for a bond hearing tomorrow. It will be up to Lester whether to grant that hearing.

O’Mara added that Zimmerman continues to be worried about his safety and that of his family.

Zimmerman was released from the jail on a $150,000 bond on April 23, but that bond was revoked by Lester during Friday’s hearing.

Prosecutors told the judge Zimmerman sat and listened as his wife, Shellie Zimmerman, lied about the couple’s finances under oath during Zimmerman’s April 20 bond hearing.

Zimmerman’s wife knew about tens of thousands of dollars her husband had by then collected in donations through a website he created, prosecutors say, but didn’t tell Lester.

“Defendant has intentionally deceived the court with the assistance of his wife,” prosecutors said in a motion to revoke Zimmerman’s bond. The state relied on recorded jailhouse phone calls, in which they say Zimmerman and his wife discussed the funds “in code to hide what they were doing.”

O’Mara acknowledged the problem his client faces in securing a new bond. “There is a credibility question that needs to be explained away,” he said.

O’Mara added that Zimmerman’s “credibility has been tarnished and he will have to rehabilitate it.”