MASON CITY – Environmentalists will be smiling brightly from an upcoming procedure at Central Park Dentistry.

Dentist Jay Lala, owner of the historic building, said a “green” roof consisting of sedum will be rolled out later this month.

“I think it will catch on,” said Lala, owner of the former Parker Opera House building. The Xero Flor roof, installed by Northern Cedar of Mason City, will have a watertight membrane covered by a root barrier, with low-maintenance vegetation growing on top.
As there is limited access to the roof, it will not be used as a patio or for other recreational purposes, but simply as an ecologically friendly way to decrease rainwater runoff and, in the long run, save money.

While the green roof will cost about twice as much as a regular roof, it will actually save on heating and cooling costs and last more than twice as long as a regular flat roof, Lala said.

There are at least four benefits to having a living roof, he said:
There is no degradation of the roof from the sun’s ultraviolet rays, so the turf-covered roof should last more than twice as long as a regular roof. That should give the new roof a lifespan of more than 50 years. “It’ll be here long after I’m gone,” Lala said.
Heating costs are about 10 percent less than with a regular roof.

Cooling costs are about 30 percent less. Not having a black membrane soaking up heat will make the building easier to cool, he said.

Up to an inch of rain can fall on the living roof without any runoff into the storm sewer, Lala said. The prevalence of asphalt, concrete and other surfaces that cause runoff contributes to flooding, as does the tiling of farm fields. “We’re dumping everything into our waterways,” Lala said. It’s increasing the frequency of flooding.

By soaking up rainwater and allowing it to evaporate and grow plant life, there is less that runs off and contributes to flooding. 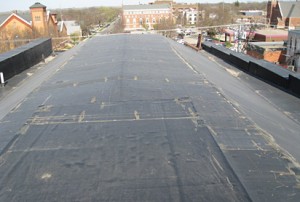 The membrane and root barrier have been installed. The turf that will cover the roughly 8,000-square-foot roof is being grown in Michigan and will be installed later this month, said Lala, who has a geothermal heating and cooling system at his home.

He said he expects to see more living roofs installed as time goes by because they are better for the environment and more cost-effective in the long-run. “A lot of states offer tax credits for it,” he said, adding that green components are almost getting to be a requirement for new construction in Chicago.

Lala said the Iowa Department of Natural Resources plans to put a weather station on top of the roof and will put in a flow meter to monitor the runoff from the roof.
Pam Myhre, Mason City director of growth, development and planning, said the idea of putting a green roof on City Hall was briefly discussed but was not pursued due to the cost.

Lala said the Central Park Dentistry building, 23 N. Federal Ave., which is on the National Register of Historic Places, will be the first commercial building he knows of in North Iowa with a green roof. However, it will not be the first National Register building in Iowa to have one. The newly rededicated Historic City Hall in West Des Moines has a vegetation-covered roof.

For more information on green roofing, go to Xeroflora.com.