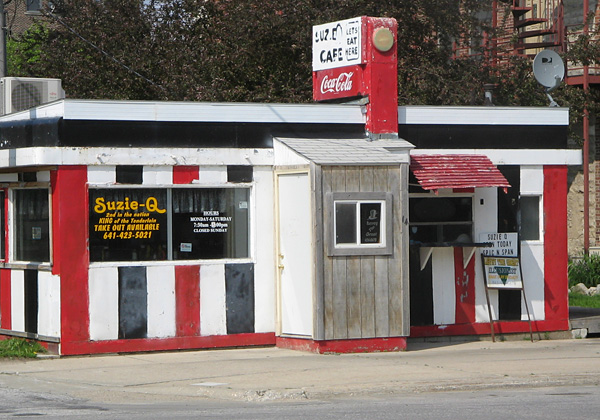 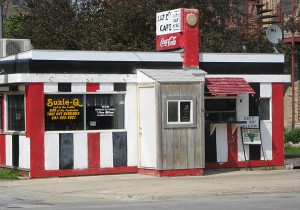 Suzie Q will be getting a facelift in July and will be closed for about 4-6 weeks Levenhagen said, the entire outside will be getting redone new windows, awnings, signage, and steel siding will all be getting replaced. Don’t worry though he will be up and running at a temporary location in downtown Mason City with a concession trailer near Cenex. Suzie Q has been getting their funding for their facelift from a generous Federal Government Grant called the Street Scape Program. The cost of the remodel is estimated to be around $50,000.00. The owner will be paying $5,000.00 of this estimated cost and the rest will be funded by the Street Scape Program run by the Federal Government.

The café qualified for this Federal Grant by being on the National List of Historic Places and being located in an area of Mason City where the community is doing a street scape project. Other downtown businesses that have received money for this program are: Brick Furniture, Ransom’s, Lorado’s, and Rieman Music are just a few more examples of the 14 businesses in all of Mason City that received the funding.

According to Levenhagen he quotes” there are only twenty two Valentine Diners left in operation today. Three of which are located in Muscatine and Spencer Iowa in addition to our local Suzie Q’s. The next closet one is Mickey’s in Saint Paul, Minnesota. When these diners began in the late 40’s you could actually by them from a catalog for $5,000.00 and have them delivered and up and running for business within two hours of the delivery time.

Suzie Q’s offers a fun atmosphere, great food, breakfasts start at $4.99 for the special and the only restaurant open for breakfast in downtown Mason City according to Levenhagen. Their tenderloin is rated second in the nation. Plus, when you leave Suzie Q’s you never leave hungry they have a great staff, generous proportions at good prices. So stop on in for a bite they have fresh baked buns and pies from Bumbleberry bakery located right downtown in Mason City and the rest of their food is purchased locally and made fresh right in front of your eyes. So next time you are hungry and looking to try something different remember that special little Valentine Diner Suzie Q’s.