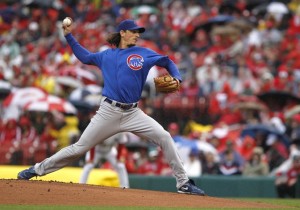 ST. LOUIS — Ian Stewart’s long wait finally came to an end Friday in the first inning of a 9-5 Cubs victory over the Cardinals in the home opener for the World Series champions.

The third baseman had gone 171 at-bats and nearly 20 months without homering in a major league uniform before he hit a three-run shot off Cardinals ace Adam Wainwright, kick-starting the Cubs to their second straight victory.

“I joked about that a lot,” Stewart said. “A couple of guys were like, ‘Did you know you got it?’ I’m like, ‘Not really, I haven’t hit a home run in two seasons.’ It felt good to finally hit that one. … To finally hit a home run in the big leagues again, after all the hard work I put in this offseason and in spring training, it’s just very satisfying.”

After starting 1-5 and looking clueless offensively, the Cubs have scored 17 runs in their last two games, breaking both games open early to take the pressure off their starter. A crowd of 46,918 turned out to see the first game of the post-Albert Pujols era, but the ballpark buzz ended soon after the championship banner was raised.

“They had a good celebration before the game, and it’s deserved,” Bryan LaHair said. “And we came out, played well and got a victory.”

LaHair’s opposite-field grand slam in the third, the first for the Cubs since Aramis Ramirez’s on Oct. 2, 2010, gave Jeff Samardzija an 8-0 lead, and the Cubs were off and running. But Samardzija ran up his pitch count and tired in the fifth, barely getting out of a five-run inning to qualify for his second victory.

“He was at a point where he was probably going to be out of there in five innings,” manager Dale Sveum said. “Then he almost didn’t make it through five innings.”

The bullpen came through with Rafael Dolis, James Russell, Kerry Wood and Carlos Marmol combining for four shutout innings, giving up only two hits and no walks. After the disastrous starts of Wood and Marmol, the bullpen seems to have settled down.

“I remember a few days ago everyone was talking about the bullpen and what was going to happen,” Samardzija said. “That’s what we all expect out of them. That’s what they’re going to give us all year. It’s nice as a pitcher when your offense gives you nine (runs) and your bullpen gives you four (innings). I was just in the right place at the right time.”

Wainwright, who missed 2011 after elbow surgery, is 0-2 with an 11.42 earned-run average. He called Friday’s outing “the worst game of my career, no doubt.” But the Cubs know they got Wainwright at the right time.

“One of the best pitchers in baseball,” Sveum said. “He has had a tough time his first couple of starts. He’s still getting his arm back in shape. That curveball is still pretty devastating when he can get ahead (in the count) and get to it.”