Griffin leads Clippers to first win over Timberwolves this season 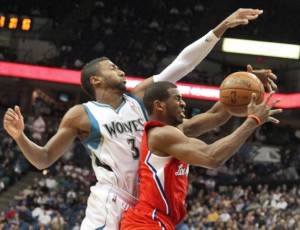 MINNEAPOLIS — The Los Angeles Clippers finally got one over on the Minnesota Timberwolves.

What had the potential to be a trap game a night after the Clippers’ impressive victory over Oklahoma City instead turned into another important victory.

For the first time in four games this season, the Clippers defeated the Timberwolves, 95-82, Thursday night at the Target Center.

The Clippers got to within one game of the Lakers for third place in the Western Conference and moved 1 ½ games ahead of the Memphis Grizzlies for the fourth spot.

“I was proud of the guys getting back-to-back wins the way we did after an emotional win last night,” Clippers coach Vinny Del Negro said after the Clippers won for the 10th time in 12 games.

Blake Griffin was the man this time, on defense and offense.

Griffin had 19 points on nine-for-16 shooting, 13 rebounds and five assists. He also had one blocked shot and his usual variety of dunks off lobs.

Perhaps more important, Griffin took two charges in the fourth quarter, both after he picked up his fourth foul.

“That’s something we talk about as a team, taking charges, getting another shot at the goal,” Griffin said. “So it worked out.”

Caron Butler did his thing too, scoring 17 points on six-for-13 shooting. He was five for eight from three-point range, the five baskets tying his career high.

Mo Williams, out the last 11 games because of a sprained left big toe, came back strong with 14 points and five assists.

And then there were the defense and rebounding of DeAndre Jordan, who had 12 rebounds and three blocked shots.

He locked in on Minnesota center Nikola Pekovic in the second half. Pekovic had 10 points in the first half, but Jordan held him to two points in the third quarter and blocked two of his shots. That set the tone for the Clippers to open a 13-point lead in the third.

“We watched some film at halftime and I noticed I wasn’t engaging him early,” Jordan said. “So I was picking him up at half court, three-quarter court. I just tried to be physical with him.”

The Clippers sent short-handed Minnesota to its eighth straight loss and eliminated the Timberwolves from playoff contention.

Minnesota didn’t have All-Star power forward Kevin Love, who didn’t play because of a concussion and neck strain suffered Wednesday night at Denver. All Minnesota missed were his 26 points and 13.3 rebounds a game.

Throw all that in after the emotional win at Oklahoma City and the Clippers knew what was at stake.

“It was tough a little bit just because of the excitement and the energy from last night’s game and also Kevin not playing and they had other guys hurt,” Griffin said. “But our main focus and the thing we talked about in the locker room before we went out was to not come out flat and not think about it in those terms and just get a win no matter what.”