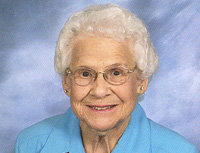 Memorial services will be held at 1:00 pm with a one-hour prior visitation on Friday, April 13, 2012 at Wesley United Methodist Church, 1405 S. Pennsylvania Ave., Mason City.

Phyllis was born on June 13, 1922 in Clear Lake, IA, to parents John and Luella Beal. She attended country school until her parents moved to Clear Lake, and then went to Clear Lake Schools. She later attended Mason City Schools, and then in 1939 she moved to Arcadia, California and graduated high school. While in California she was married to Wendel Stewart, and to their union daughter Roberta was born. Before moving back to Mason City in 1948 Phyllis divorced. She remarried Gus Ruhnke, June 7, 1952 at Wesley United Methodist Church, and they were married for 50 years. Phyllis was an active member of the church. She sang in the choir, was chairperson of the church circle, and taught bible school. She had a beautiful voice and would sing as a soloist at the church in Wheelerwood. Phyllis was a nurse’s aid for 24 years at Mercy Hospital in Mason City. She worked in OB, Pysch, and the Medical Floor before retiring as a Unit Clerk. After retiring she worked as a sales woman for 7 years at Lundbergs. Phyllis had a wonderful sense of humor and liked to make people laugh. She always said she’d rather make people laugh instead of cry. One of her favorite one-line sayings was, “There may be snow on the mountain, but there’s still fire in the furnace.” She loved her family and spending time with them made her the happiest. She also loved to watch game shows on T.V., especially Wheel of Fortune; she was good at figuring out the puzzle. Her family all loved and adored her very much. She will be very missed. Those planning an expression of sympathy are encouraged to make memorials to Allina Hospice of Minneapolis, Minnesota.